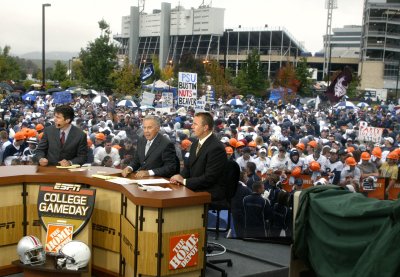 There is no better energy engine for a football program than to host ESPN’s Gameday, but they are not welcome in Bloomington.

“No more fun of any kind!” bellowed Dean Vernon Wormer as the members of the Delta house filed out of a disciplinary hearing in Animal House.

It kind of felt that way when Indiana football coach Kevin Wilson answered a question during his weekly radio show about the possibility of ESPN’s Gameday coming to Bloomington for the Ohio State game in nine days, “First, you’ve gotta fill your stadium, which we haven’t played well enough to do.  We actually blew all that up, because it’s a wasted conversation for our football team.”

Wilson is right that empty seats sometimes outnumber those filled with fans on football Saturdays, especially in the second half of games after the Hoosiers have been eliminated from bowl eligibility, but the Hoosiers have won four straight games for the first time since 1993 and stand 3-0.

Fans are excited, the media is paying additional attention.  As big a longshot the Gameday to Bloomington campaign is, why not hop in front of the parade and enjoy the rare display of enthusiasm?

Wilson’s remarks smack of a coach desperately trying to maintain control of the emotional state of his team, which is understandable but impossible.  Players are likely thrilled to finally be 3-0, dig the attention on campus, and want to keep the fun rolling.

The unnecessary stop sign from Wilson appears fear-based, like Wilson is afraid that if Gameday came to Bloomington it would set up the Hoosiers for failure and national humiliation, as in, “Jeez, remember when Gameday came and Indiana got hammered by Ohio State 92-3?”

Given the last 22 years of poor to mediocre football authored by the program he runs, it’s hard to blame Wilson for being more than a little skittish about inviting a national spotlight to Bloomington, but if he wants full seats to the corners at Memorial Stadium, there’s nothing like ESPN throwing a party watched by millions to help.

Indiana is a soft 3-0 with home wins that could very easily have been a humiliating losses against directional schools happy to accept their appearance fees.  No one in Bloomington needs to apologize for winning those games as Western Kentucky beat Vanderbilt and Florida International won against Central Florida.  Good football needed to be played by the Hoosiers to go 3-0, but none of their opponents are anything like Urban Meyer’s Buckeyes.

To be bullish enough to invite the most watch college football show in America to town prior to a game against the #1 team in America would be audacious, but at some point – what the hell is there really to lose and by whom thru audacity?

Coaches are control freaks, and given the shaky success enjoyed in Bloomington heading into yet another winnable game at Wake Forest this weekend, Wilson’s decision to not put IU in a spotlight that might make it look ridiculous is predictably rational.  But facts are facts – Indiana is the losingest FCS program in history, has gone to one bowl in the last five generations of students, and during games has more fans of tailgate parties outside the stadium than fans of football inside it.  That is Indiana Football, and changing that perception requires the breaking of a few eggs as well as posting wins.

It’s time for a little defiant enthusiasm.  The downside is that Indiana is Indiana, and that everything that was true about IU Football prior to Gameday coming to Bloomington remains true.  The upside is what happens after very publicly stating the belief that Indiana is worthy of the spotlight – that Indiana Football has turned the corner.

Shutting down the grassroots attempt to bring Gameday to Bloomington is endemic of the malaise surrounding the Hoosiers program, and just as the recruiting has improved under Wilson, so should the way in which this program is branded.

Embracing the unlikely prospect of Gameday coming to Bloomington would have been a step in the right direction for Wilson and Indiana Football.

If Wilson wants fans to be energetic participants in the program’s success, he needs to lead them.