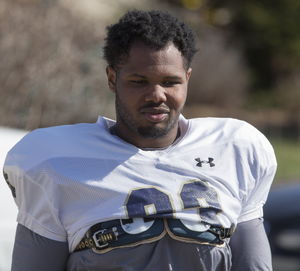 Notre Dame DT Jay Hayes learned that pressing delete is not the same as not pressing send.

Venting feels good for a moment, and then come the consequences.

When alone in a car, the comeuppance is a confused stare from the driver of the car next to you.

With your girlfriend, boyfriend, husband, wife, mom, or dad, it’s generally a minute or two of patience before being told to get over yourself.

On social media, the cost can be your job and reputation.

Pressing send comes with a cost when criticizing a boss intent on teaching through penalty.

When Notre Dame defensive tackle Jay Hayes took to Twitter to express concerns about the level at which he is being coached, his desire to win this season, and then transfer, coach Brian Kelly decided that missing tomorrow’s game would be an appropriate response.

Hayes tweeted like a kid, “When a coach stops coaching you..that’s when you jus gotta move on, Gotta get this natty (national championship) and I’m out.”  Kelly responded like an adult, “You have to think before you hit send, and what you have to do is knock on my door instead of hitting the send button,”

Walking into the office of a mature and secure boss/coach/manager/department head and asking for an explanation of managerial strategy or with ideas for change is always welcome.  A threat to leave posted on social media is usually met with an invitation to leave.

Better to learn that lesson in college than when living paycheck to paycheck as a young adult with kids, but best to acquire the restraint needed to avoid showing your ass for all to see on social media in the first place.

Talking rather than tweeting allows you to control the scope of the recipients.  A private conversation shows respect for authority and a desire to see improvement in operation.  It gives the boss a change to seek clarification, and provide a response.  Two people talking can arrive at a mutually agreeable solution (or not).

Tweets are 140 character blasts without nuance, as Hayes showed.  They tend to be efforts at communicating a simple and caustic truth; the kind of thing most don’t have the stones to say to a person’s face – exactly the kind of thing coaches and bosses hate.  And there is no backing off and shaving down the rough edges as is normal during a conversation.

Emails are less imperfect, but still once the send button is pressed and an email is delivered, the distribution of that communication transfers to the recipient – which is rarely a positive.  I learned a long time ago to write two emails – one that purged any frustration, and a second that was crafted to elicit the best response.  I always sent the second one, and never regretted it.

If I were an advisor for college and professional athletes, my message would be very simple – find a role model who is achieving the results you covet and do what he or she does.  In this case, Indianapolis quarterback Andrew Luck is the best.

Luck owns a old flip phone and doesn’t engage in social media at all.  Yes, a high profile professional athlete who could easily aggregate a couple of million Twitter followers if he liked, eschews social media completely and is not waiting in line this morning for a new iPhone 6s.

What could he gain?  Branding?  An outlet for angst?  A chance that in a moment of weakness, he writes something inflammatory that unravels years of prudence?

Shut up and do your job is a pretty damn good idea for a college student.  It has served Luck well.

As Kelly suggests, adults confront the source of their frustration head on – face to face.  Hopefully, Hayes learned that lesson, and maybe dragged a couple of teammates or peers along for the ride.