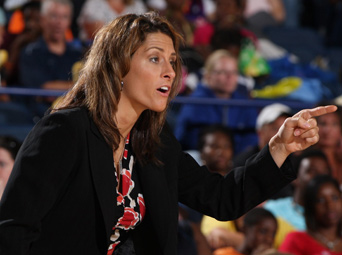 Sure, they are a lot of options for your live and televised sports viewing right now.  The Colts are in a state of virtual chaos, IU is undefeated entering Big Ten play for the first time since 1987, the faster and younger Pacers open preseason play Saturday, Notre Dame is a national champion contender, Indiana high school football has never been more competitive, and the Cubs are rolling into the playoffs for the first time in seven years.

But the Indiana Fever heading into the WNBA Finals for the third time in their history is worth a look, and not just during the commercials of your first choice.

Here are 10 reasons the Fever are worth your time:

10 – The Fever have lost the first game of the best-of-three series (lose two and go home) and bounced back to overcome those deficits.  Going 4-0 in elimination games shows great resilience, and we like resilience.

9 – Bankers Life Fieldhouse is the best basketball arena in America, and any reason to head there for an event is a good one.

8 – The fans are passionate as well.  There aren’t as many fans at game as for Pacers games, but it gets fun and loud during Fever games.

7 – Kelly Krauskopf has led the Fever since day one, and has built the team into a potential champion for an entire generation.  She has exhibited the leadership necessary to put a franchise in position to win.  In great franchises – owners own, managers manage, and coaches coach.  Sounds like the Fever to me.

6 – Whether basketball is played by women or men; it is basketball, and we love watching basketball in Indiana.

5 – The Fever sent Bill Laimbeer (the coach of the New York Liberty) home, and any team that can ruin a single day of Bill Laimbeer’s life is worthy of a basketball fan’s respect.  Going to a game to thank them is a principled investment of our time.

4 – No major league team in Indianapolis since the ABA Pacers has been as successful in the playoffs.

3 – The games last a very manageable two hours.  I love college football, and will be in Bloomington Saturday for the Indiana vs. Ohio State game, but damn, those games regularly last four hours, and that’s too long.  Fever games jam all the excitement into half the time.  That efficiency deserves our attendance.

2 – The likes of Tamika Catchings will not be seen in the WNBA once she retires after the 2016 season.  She is the Henry Aaron of the WNBA and the marquee name that will be associated with the Fever forever.  If you haven’t seen her play, you should.  She is not only a great player, but a warrior and a generous person.

1 – Stephanie White is as good a basketball coach as there is in a state that loves basketball more than any another.  Writing that she could very easily slide over and successfully coach men might be viewed as an insult to women’s basketball, but it’s absolutely true.  She is smart as hell, has an innate sense for the game, is secure in her leadership, and communicates exceptionally well with players.