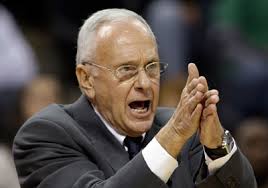 SMU coach isn’t to blame for the mess that led to sanctions. He is who he has always been.

People in their 70s do not become more compliant.  That’s a pretty solid behavioral axiom for those who on life’s journey have rounded third and are heading for home.

Seniors tend toward irascibility because they come to the realization they can get away with it.  If a person was surly and unyielding in his 40s, he will tend toward full on cantankerousness as the decades pass.

In Brown’s first two turns as a college coach, his programs were cited for NCAA violations.  UCLA’s NCAA Championship appearance in 1980 was vacated because two players were used despite being ineligible.  At Kansas, a potential transfer was allegedly given a plane ticket by Brown to visit his ailing grandmother.

Who can blame a coach for empathizing with a kid in need with a sick grandma?  Buying the plane ticket won’t keep Brown out of heaven, but it was an NCAA violation.

Fast forward 25 years to 2012, and Brown was back in business as the head coach at SMU.  No one can teach basketball like Brown, but his priorities have never included compliance with a book full of rules – and many of the rules college coaches are held responsible for following are seen by many as worth ignoring.

There was zero chance Brown had suddenly decided at the age of 72 to embrace the concept of following rules that might stand in the way of winning.  As i mentioned earlier, that’s not the way human beings are wired.

So when reports surfaced that an SMU assistant basketball coach was accused of completing high school course work for a student in an effort to make him eligible to contribute to the culture of winning Brown was trying to install, no one but the boobery at SMU responsible for employing Brown were surprised.

And so the NCAA has suspended Brown for nine games, imposed a postseason ban for 2016, and stripped of three scholarships for each of the next three seasons.

SMU’s defense of Brown has included the “He’s an old man who forgets things” gambit, which was unsuccessfully employed by Jerry’s Uncle Leo on “Seinfeld”.

It’s not likely to be any more effective for Larry than for Leo.

None of this makes Brown a bad guy – just an inattentive one.  Allowing a set of rules to determine how he coaches young men on the basketball court is not in Brown’s character.  It wasn’t in 1980 or 1986, and it sure isn’t today.

None of this shames Brown, and it shouldn’t.  He is who he is.  The fault here is with the poor students of history among SMU leaders who determined Brown was the right man to lead the Mustangs from entrenched irrelevance.

Incredibly, SMU president R. Gerald Turner not only runs the university but sits as co-chair of the Knight Commission on Intercollegiate Athletics.  If anyone should have shown the foresight needed to avoid hiring a win-first coach like Brown, it’s Turner.

The goal of the Knight Commission as stated in its website is “to ensure that intercollegiate athletics programs operate within the educational mission of their colleges and universities.”  Nice words until a staff member of the program under the watchful eye of the co-chair of the august group of nincompoops starts fulfilling the educational mission with his own work.

The endless hypocrisy of the addlepated rubes who argue that education is the primary mission of college athletics is, well, endless, bottomless, and boundless.  Of course, Turner claims no responsibility for the mess, and absolves Brown from any blame.  He says the wrongdoers are no longer employed at SMU, and that the culture of compliance is strong.

Of course, he says that.

What SMU isn’t – despite this latest episode?  Willing to say goodbye to a coach whose work helped return the university to national media prominence because he is a talented basketball coach.

Yeah, college sports is all about education.  Sure it is.

2 thoughts on “Larry Brown’s mess at SMU – who didn’t see this coming? And why Larry isn’t to blame”