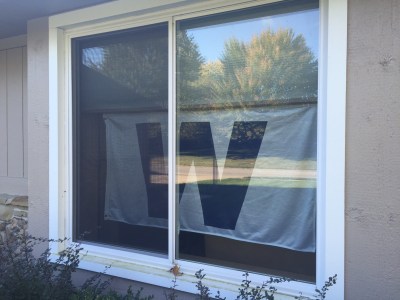 When the Cubs win, the W flag hangs in the window of the Sterling home – until we get a flagpole.

Driving home yesterday, hauling ass to watch every pitch pf game four of the NLDS just like when I ran home everyday from Mrs. Zimmer’s class at Lake Bluff Central Elementary to catch the end of every regular season game in 1971, I heard Jake Query on WNDE lambasting me for my flip-flop from lifelong Cubs fan to Cardinals fan when I moved to St. Louis and back again when I returned to Indianapolis.

As he often does, Jake took an ounce of information and provided a gallon of perspective.

The truth is a little more nuanced than a caveman radio host yelling “Fire! BAD!”

I have always been a Cubs fan.  From the time I understood language, it was how my Dad and I communicated.

Dad – “How was Jenkins today?”

Me – “He worked too quick for me to see anything but the eighth and ninth, but from what I saw, he had good sink on his fastball.”

That conversation was repeated with many different pitchers and scenarios until 2002 when he died.  He took me to my first game in 1968, when I sang the National Anthem as loud as I could so my Mom could hear at home (showing a complete ignorance for how sound is conveyed via TV) and Ernie Banks hit a home run in a 9-8 loss to the Reds.

I took the North Western to the Davis stop, and hopped on the Howard to Wrigley with my friend Nick Anson a bunch of times before moving to an apartment six blocks south of Wrigley, where I would put my son on my shoulders and walk to the ballpark to sit in the bleachers and watch games on my frequent days off.

None of that credentials me as a great Cubs fan – just one of many with the same stories.

Again, no proof of insanity.  I did earn the right to buy NLCS and World Series tickets in 1989 by spending a disproportionate number of summer afternoons at Wrigley with my son, but that was all for naught as my NLCS tickets were for Game Six and the series was won by the Giants in five.

In 2011, John Kijowski called and offered my the program director’s job at 101 ESPN in St. Louis.  One thing I knew as I drove from Indy to that baseball crazy town was that my collection of Cubs memorabilia was not going to impress the staff – 90% of whom grew up Cardinals fans in a way most baseball fans simply can’t understand – so I brought some Cardinals swag to decorate the office.

My wife and I rented an apartment across a parking lot from Busch Stadium, and because we both love baseball, went to a bunch of Cardinals games.  I’m not one of those nuts who believes that in order to love one team, you must hate all others.  Neither is my wife.  We came to admire the Cardinals style of play and enjoyed watching their unlikely run through the playoffs and World Series in 2011 and the playoff run in 2012.

In my role as PD at 101 ESPN, I got to know some of the people in the Cardinals front office (including VP of communications Ron Waterman and SVP sales and Marketing Dan Ferrell), and I came to admire their devotion to providing a great experience for fans.

The Cardinals are hard not to like, even for a lifelong Cubs fan, and given that I never tried to dislike them I wound up rooting for them.  It helped that the Cubs were in the nascent stages of the rebuilding process that today has them up 2-1 in the NLDS against those same Cardinals.

Watching the Cubs suck under a series of overmatched managers on TV was a hell of a lot less fun than going to Busch Stadium to see the Cardinals win a World Series with Tony LaRussa at the helm.

Jake also criticized my social media portals which featured Cards logos for a couple of months after I returned from St. Louis.  Guilty of remaining skeptical about the Cubs while also being unwilling to fly my freak flag for one of the Indiana teams I spend time assessing on social media, my radio show (CBS Sports 1430 – weekdays 3p-6p), and here on kentsterling.com.  Guilty.

In fact, I still have a Cardinals license plate holder on my car.  Sadly, I have found no suitable replacement worthy of taking the time necessary to change it.  I would prefer a license plate holder with some prescient commentary on life without extolling the virtues of cat ownership, which I cannot seem to find.

Just prior to the beginning of the 2013 season I left St. Louis to return to Indianapolis, and my love of the Cubs was slow to re-ignite as the business office of the Cubs seemed intent on nickel and diming fans while investing none of that money in on field talent.

It seemed idiotic to embrace the profit first philosophy of the fiscally focused Ricketts cabal, so I devoted my attention to being angry with the way the Cubs operated – the long time pastime for Cubs fans.

Being a fan does not blindly grant a pass to management for idiocy.  Cubs fans are among the best critics of management in our society.  Criticism for one team does not imply a lack of love.  How many married couples use arguments as their sole form of communication, and yet at the end of the day, they snore all over one another.

I am a Cubs fan and a Cardinals admirer.  No schizophrenia required for both to exist in the same brain.  It’s not nearly as crazy as late Cubs GM John Holland trading Lou Brock for Ernie Broglio.

Jake might not understand that, but I’ll bet you do.

3 thoughts on “How did a Cubs fan become a Cardinals admirer, and then switch back? It was strictly business”