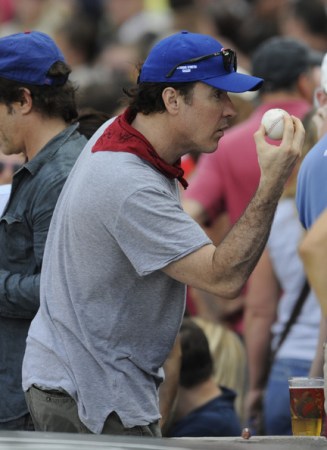 John Cusack showed us he can’t play baseball in “Eight Men Out”, but he sure does like to be seen watching it.

There are hip sports fans, and then there are the dated and weird fans that we only see at the sporting events they have became inexorably linked to.

Jack Nicholson will be forever hip even as he makes fewer movies, but he doesn’t miss many – if any – Lakers games.

Spike Lee is at least as well known as an annoying Knicks fan as a filmmaker, and he stretches the definition of hip, but at least he’s still pseudo-relevant.

Cameras at Wrigley Field last night keep finding 1980s actors John Belushi – best known as the brother of the very talented John Belushi, who died of a drug overdose in 1982 – and John Cusack, who will be forever remembered as the guy holding a boombox over his head in the 1989’s Say Anything.

Both actors are still churning out films, just not in anything you’ve seen or heard of.

Pearl Jam front man Eddie Vedder got a bunch of screen time on TBS during game three, but he’s forgiven for two reasons – he wasn’t seeking out the camera nor eager to be recognized, and he’s unmistakably hip.

Bill Murray is a longtime Cubs fan as well, but if he was at Wrigley Field he was successful in avoiding the relentless attention that was paid to Cusack and Belushi.

The repeated shots of the faded celebrities on TBS reminded me of the Indianapolis 500 and its parade, which always features Florence Henderson (Carol Brady) signing “God Bless America”, and “Laugh-In” (1967-1973) star Ruth Buzzi inexplicable tethered to a float.  Until last year, Jim Nabors sang “(Back home again in) Indiana” prior to the race.

All of those appearances have become fun and kitschy – unlike Belushi and Cusack’s which appear contrived to retain some relevance by being seen on TV.

When the anonymous seek fame, it’s understandable.  Being famous looks like a great time.  People crowd around you, buy you drinks, and girls ask you to sign their boobs.  When the famous seek anonymity, I get that to.  Being hounded to sign stuff (even boobs) probably gets old.  When the anonymous seek anonymity, we call those people hermits.  When the famous seek greater fame, those people are our society’s saddest wretches, the Kardashians, or both.

If the Cubs continue to progress through the playoffs to the World Series, being at games will become an even bigger deal for celebrities with ties to Chicago, and maybe the opportunity for owner Tom Ricketts to recruit over Cusack and Belushi will present itself.  That would be a very positive step for the team that has shown similar aggression in turning over its roster.

Regardless of who the Cubs face in the NLCS, the Cubs duo of annoying former celebrity fans will be matched by those of the Dodgers (Larry King & George Lopez – the hispanic version of Jim Belushi) and Mets (Adam Horowitz of the Beastie Boys, a perfect amalgam of Cusack and Vedder – and Kevin James, NYC’s even less funny version of Jim Belushi).

I would love for the producers and directors of the broadcasts of the NLCS and (if it happens) the World Series to train their cameras on the field, but in some idiotic TV production handbook there must be an edict to seek out celebrities – even hackneyed, dated celebs – for cutaways.

At the very minimum, I hope the cash-first business office of the Chicago Cubs will require Cusack and Belushi to pay for their seats.