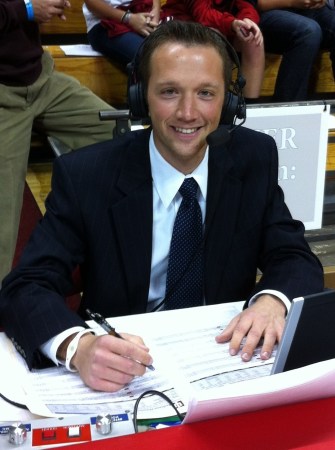 Scott Agness doing what he always does – work and smile.

Being a radio producer is not a career destination; it’s a step toward something else – an opportunity to host, sell, or manage.

So when my producer for the first 16 months of my show, an affable and diligent young man named Nick Bosak, told me he was leaving the show to take a gig in digital media in suburban Chicago, I was very pleased for him.

When I hired him prior to the launch of the show, I told Nick that if he was my producer in two years, we both would have failed.  Comfort with producers is a siren song very difficult to ignore in talk radio because baring your soul while alone in a studio every day is not an rational act and the only human touchpoint for a host is often a producer.

The only person who provides immediate feedback as a host reveals feelings, thoughts, memories, and whatever wisdom to which he or she has access is the producer, and as a result that relationship can become very important to the success of the show.

Nick was a key component to our success.  He worked hard and smiled often as I ranted, raved, and opined, but as much fun as he was to have around and for all the good his work did in building 10 relevant daily segments that consistently delivered on our promise to listeners, it was his time to move back to his hometown and start  a new chapter in plumbing his potential.

Enter Scott Agness, another diligent content creator who brings a different skill set to the show.  Scott has worked to create a brand covering the Indiana Pacers and Fever, and will bring that experience to the show each day from 3p-6p.

He’s an Indiana grad who is building a career in several different disciplines that will provide the tools to conquer great professional challenges.  Scott’s tenure with the show will be a step toward success – a spot where he can continue to build his brand until it reaches a place where someone pays substantially for his expertise and relationships.

In the meantime, you can hear him on our show every afternoon from 3p-6p on CBS Sports 1430, read his work at vigilantsports.com, and listen to his play-by-play work for IUPUI.

His grasp of social media, unending hustle, and good humor will help the show reach sports content consumers in Indiana and beyond.

Change in business and media should always be positive.  Hiring a person with a different skill set can help an entity take a different tack toward greater success, and the person who left can achieve greater things as well – as will be the case with Nick and Scott, who are and will continue to be friends.

Nick is missed by listeners – and me.  Scott is welcomed for his personality, attention to detail, and insights.  That’s the way life and business should work.

And when Scott decides that producing this show is the bucket he needs to replace with another that provides a more lucrative reward, the next person engaged to fill his duties will bring a new set of unique talents and skills.

It will be great for Scott, and allow the show to grow in yet another direction.

That’s what makes working in media fun for everyone, and allows talk radio to be the most immediate and engaging medium there is.

Nick has moved on to what he has earned, and Scott will do the same.

Enjoy Scott Agness as a part of the show for as long as he stays because he is destined for bigger and better things.

That is what we do, and it’s what Scott will deserve.