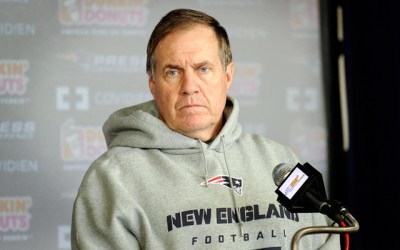 Bill Belichick needs to be humbled, but until it happens, hating him is weak.

Given the last four games between the New England Patriots and Indianapolis Colts, making a case that the Colts can beat the Pats is impossible.

Sure there are reasons for optimism, and I believe the Colts will be very competitive Sunday night, but ratcheting up a 2008 level of optimism with the accompanying disdain for Bill Belichick and Tom Brady feels disingenuous and ridiculous.

Admiring a man with priorities as out of whack as Bill Belichick’s is outside acceptable behavior, but hating him after the last four beat downs of the Colts his Patriots have administered is petty and narrow.

Football is not war.  Lives are not at stake.  Win or lose, life will go on.  Belichick coaches as though every win validates his existence on Earth.  That is all loathsome, but until the players and culture of the Colts succeed against him, I can’t muster the psychosis needed to bitch about the guy.

Tom Brady is great looking, has a house with a moat, married a woman who has spent half her life on magazine covers, wears four championship rings, and gave a rousing speech to football players at his alma mater that should be shown to every young person on the planet.  He has a great story of overcoming adversity too.

Hating him would be the simple choice, but hate born of envy is a cheap and immature response to the three-street intersection of genetics, luck, and grit on which Brady resides.

Until four years ago, a game between the Colts and the Patriots was must see TV across America because they were seen as the two best teams in the NFL led by the two best players in the NFL.  The last four games between these former rivals have been disasters for the Colts.  The Patriots have not won any by less than 20 and the average point differential has been 29 points.

There are many reasons to believe this game will be more competitive – the mediocrity of the Pats offensive line made worse by left tackle Nate Solder’s injury, the rebuilt and equally mediocre defensive secondary, the Colts retooled defensive line that has become increasingly adept at stopping the run, and the return to health of important cogs in the Colts machine – Andrew Luck and Gregg Toler among them.

While my skin still crawls when I see Belichick on the sidelines or Brady under center at Lucas Oil Stadium, the craving to see them dosed with some serious humility is countered with a fear that these hubristic barbarians playing a boy’s game will deliver a fifth straight bludgeoning of the Colts as built by GM Ryan Grigson and led by Chuck Pagano.

Whatever happens Sunday night, indulging in hate for Belichick and Brady might make you feel better in the moment, but it’s weak sauce given the Patriots recent dominance.  It would be akin to Jaguars fans hating Chuck Pagano and Luck.  How many in Indy would take that seriously?

The best tactic is to stay quiet until finally the Colts re-emerge from Belichick’s back pocket.  Now, if you are going to Lucas Oil Stadium for the game, get loud and raise hell.  But leave the unsubstantiated boasts on social media to Bears fans.

Unless the Colts happen to win – then you and I need to unleash the ill-tempered hounds of invective-filled mockery on the haughty douchebags from New England who believe they are on the side of right because Belichick is a deranged mad-scientist hellbent on gridiron domination.