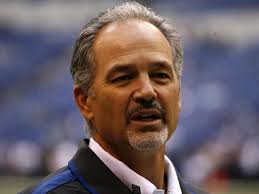 This confident look from Colts coach Chuck Pagano has vanished over the last two months.

Coaches who feel the hot breath of a boss on his neck tend to make squirrelly decisions.  Indianapolis Colts coach Chuck Pagano made a call last night with the game on the line that defied logic, belief, and rationality.

Facing a fourth-and-three on their own 37 while trailing by six with 1:14 left in the third, Pagano reached deep into football history’s bag of tricks.  Colts Anderson lined up behind Griff Whalen with the other nine Colts stationed to the far right.  Whalen snapped the ball to Anderson, who was swarmed by the three Patriots who were positioned on the ball.

The result of the play was a loss of one that was followed by a Patriots touchdown a little less than three-and-a-half minutes later to give the Pats an insurmountable 13-point lead.

Not only was the play unsuccessful, the formation was illegal, so even if Anderson had found a seam to gain the three yards needed for a first down, the play would have been negated.

Bad decision.  Bad execution.  Bad coaching on a night when it seemed the players were up to the challenge.

Because the Colts chose not to offer Pagano a serious contract extension, his deal will expire after this season.  That decision has left fans and media wondering about a serious schism between general manager Ryan Grigson and Pagano, and more importantly questioning owner Jim Irsay’s belief in Pagano as his team’s leader.

Whether or not the rumors of a rift are accurate, the decision to run a fake punt out of a wacky formation that never results in a snap much less a first down is exactly the kind that desperate men make when their jobs are in serious doubt.

The dynamic is similar to the sad sack at the casino trying to get his mortgage money back after a night of bad beats.  Reason goes out the window, and bets with a huge house advantage are not only considered but embraced.  The result is almost always horrible, as it was with Pagano last night.

As Whalen sheepishly left the field, Pagano asked, “Why did you snap it?  Why did you snap it?”  Well, Whalen is not idiot.  He’s a Stanford grad who makes a living doing what he’s told.  His decision to snap belies an unfortunate lack of preparation – the kind of bad prep that will get a team beat against Bill Belichick – the master of being ready for everything.

At least Pagano was contrite in his postgame comment about the play, “The punt play, again I take responsibility there. The whole idea there was on a fourth-and-3 or less, shift to an alignment to where you either catch them misaligned, they try to sub some people in. Try to catch them with more men on the field, twelve men on the field and if you get a certain look you got three yards, two yards, you can make a play.

And so a winnable game against the World Champions became a loss.  Players who fought and executed were discounted as a beleaguered coach decided to try to roll boxcars to keep his gig.

Fans who debated whether the backslide the Colts have experienced through six games this season has been caused by Pagano’s schemes or Grigson’s personnel decisions got a significant piece of information last night to inform their decision.

But a deeper question exists – would a coach who ran together three straight 11-5 records and advanced one step farther in the postseason each year and received a contract extension as a result have made that unfathomable nonsensical call?

Pagano is a smart coach loved by his players.  Perhaps because of uncertainty in his position, decision-making took a bizarre turn last night and may have sealed his fate as the latest former coach of the Indianapolis Colts.

These are strange times for a good man and coach who might have lost his house last night.