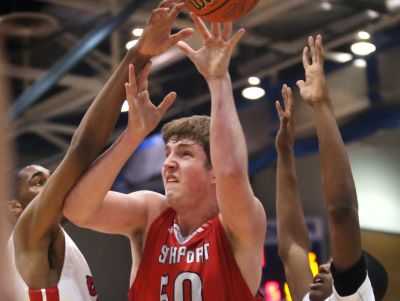 Southport’s Joey Brunk is headed to Butler next year. For a peek as to what kind of kid Chris Holtmann is getting, head to Southport tonight at 6p for the semis of the Marion County Tournament.

The Marion County Basketball Tournament continues tonight with semifinals at historic Southport Fieldhouse, and among those in the crowd will be many college coaches getting a look at the future of college hoops.

Through the next two months young men who have worked their entire lives to excel at basketball will put their skills and mettle to the test in front of thousands of peers, parents, and people looking for a fun and cheap way to enjoy a cold night in central Indiana.

Basketball is different from other sports in that fans are a few feet from the playing surface and the faces of the players aren’t hidden by hats or helmets.  Every grimace, grin, and mouthed cuss word is visible to all.

While the state tournament might have changed from the one-class showcase made famous by “Hoosiers”, until March rolls around Indiana’s game is entirely unchanged from what we grew up with.

There are plenty of reasons to take in a game this weekend.  In fact, here are 10 of them.:

10 – Watching coaches sweat.  It seems ludicrous that the career path of an adult could hinge on whether a 15-year-old can knock down a free throw late in a game, but that’s exactly the world high school basketball coaches live in.  High school administrators should be reasonable enough to understand the most important role a coach fills is as an educator, but plenty get fired for losing.  Maybe it’s cruel to laugh at them stomping and cavorting on the sidelines, but I get a bang out of the silliness of the whole deal.

9 – Really good hot dogs.  The quality of the weinies varies from high school to high school, but overall they are pretty damn good for two bucks.  I am especially fond of the hot dogs at Tech High School during the Indianapolis City Tournament.  Some places steam the buns.  Mmm, mmm.

8 – The bands rock.  When I attended a Hamilton Southeastern game last year, the HSE Jazz Band played during timeouts and at halftime.  They played a superior version of Chicago’s “Make Me Smile” that did exactly that for me.  While Brian Satterfield’s team is certainly worth the price of admission, make sure that jazz band is playing the next time you roll to 126th and Olio for a game.

7 – Judge for yourself whether fan chants should be stopped.  In Wisconsin, the high school athletic governing body is trying to put a stop to students yelling “Airball”, “You can’t do that”, and other mildly derisive cheers.  At the North Central vs. Lawrence Central game I attended Tuesday night, I counted three “Airball” chants and only two “You can’t do thats” yelled by the enthusiastic North Central fans.  Lawrence Central players never seemed upset – not a tear was shed.  The only response I saw was LC guard Kyle Guy knocking down three-pointers to shut them up.

6 – Cheap date.  Tickets are generally $5, and while beer is not available at the concession stand, unless you have an in over at Bankers Life or Hinkle, you are going to be out significantly more than the $10 for ducats, plus concessions with prices significantly higher than the $2 for a hotdog, and another $1.50 for a pop at HS games.

5 – Watch parents squirm and writhe.  Anyone who has ever been a sports parent knows what it’s like to die a little with every turnover, missed shot, and blown call.  it’s a lot of fun to see that same level of idiocy infect the normally reasonable behavior of sane and smart parents.  The calm and logical become twisted wretches looking for any opportunity to spew invective at opponents, coaches, and refs.  It’s simultaneously hilarious and horrifying.

4 – You get to watch, judge, and project.  We love TV shows like “American Idol” and “The Voice” where ordinary people audition for a chance at stardom because we get to discover greatness along with a panel paid to do it.  At high school basketball games, we get to do the same thing.  What do you look for in a basketball player – athleticism, length, shooting ability, aggressiveness, team-first behavior?  Whatever it is, no one is wrong in a high school basketball gym, and sometimes we wind knowing more than some high-paid college coaches who miss on kids with stunning regularity.

3 – Every once in a while you get to witness something spectacular.  When talent and preparation meet opportunity, something incredible can happen.  When my son played at Cathedral in the Hall of Fame Classic, he hit a buzzer beating 22-foot hook shot to beat Valpo in the morning semifinal.  It looked like a lucky shot, but I had seen Ryan hit thousands of those hooks during hundreds of shooting workouts.  Faced with defense on the perimeter from 6’8″ Robbie Hummel, Ryan had no choice but to tap into a shot that he never thought he would use in a game.  Buckets.  I also saw him hit a shot while literally sitting in the middle of the lane at Carmel High School.  Never saw him work on that, but there is a chance in every game you’ll see something amazing.

2 – To see the next generation of great college players while they still play for fun.  My goodness, it’s hard with see two teams in this area play without being blown away by the talent and grit of a young man destined for success at the next level and beyond.  At Southport, there’s Butler bound Joey Brunk and Paul Scruggs.  At Lawrence Central, Kyle Guy is enjoying a spectacular senior year before rolling out to Virginia.  At North Central, junior Kris Wilkes has a full tool box.  Lawrence North has the gifted sophomores Kevin Easley and Antwan Cushingberry.  Cathedral has Eron Gordon, while HSE boasts Zach Gunn.  C.J. Walker is going to Florida State after finishing a great career at Tech.  You get the picture.

1 – High school basketball is exactly the same as it was when you went to school.  I went back to New Albany High School for a basketball game last weekend for the first time since I graduated, and had a spectacular time.  The band sat in the same place, the student section was in the same spot, and the media area where I broadcast so many games on WNAS Radio was entirely unchanged.  It was great.  Regardless of the change almost 20 years ago to a four-class tourney in Indiana, until March high school basketball is exactly as it has always been.