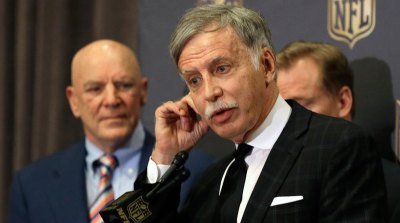 Rams owner Stan Knoenke answers questions about why his team will move immediately to Los Angeles from the town that embraced them for 21 mostly mediocre seasons.

Many NFL franchises have floated the threat of a move to Los Angeles to motivate their current cities to at least partially fund new digs.

When St. Louis blinked at a Rams proposal to stay, owner Stan Kroenke decided Los Angeles would be his team’s new home.

A similar scenario played out in Indianapolis 14 years ago when owner Jim Irsay decided the RCA Dome was not a sufficient building for his Colts.  The deal to build Lucas Oil Stadium was crafted soon after.

Why did Indy do what was necessary to keep the Colts stay while the Rams are now packing for the move to LA?

10 – NFL wanted Los Angeles vacant until franchises in need of a new stadium got one.  There have been dozens of overt and veiled threats by teams – including the Indianapolis Colts in 2002 – to move to Los Angeles in an effort to leverage funding for new or renovated stadiums.  With most of the NFL team’s facilities upgraded, Los Angeles’s use as financial lever expired.  Finally, an owner with the cash and stones to build a palace came along, and so the rights to LA now belong to Kroenke and the Rams.

9 – Indy was built to host sporting events while St. Louis is not.  Back in the 1960s, some Indianapolis leaders convened to plot a course for the city.  It was decided that all civic decisions be driven by a desire to host a Summer Olympic Games.  That hasn’t worked out, but the mission of becoming sports friendly through longterm civic planning brought the ABA Pacers to the NBA, the Colts from Baltimore, the NCAA from Kansas City (and many Final Fours with it), the Pan Am Games, and a Super Bowl to Indy.  St. Louis?  They are fine – and have been fine – the way it is without making a longterm commitment toward a developmental focus.

8 – Jim Irsay not quite as greedy as Silent Stan.  Irsay is no stooge.  He understands business and the NFL, but Kroenke is ranked #63 on the 2015 Forbes 400 with a net worth of $7.6B.  Irsay is #293 with riches totaling $2.3B.  Stan is all about the billions, while Irsay loves his team – and money.  Stan’s money is self-made, and Irsay inherited the team from his dad – a man who engineered one of the most contentious franchise moves in sports history.  Kroenke’s laser focus on increasing wealth trumped his love of team and town.

7 – It was always Kroenke’s intent to move to LA.  Kroenke makes his cash in real estate development, while Irsay is a professional football franchise owner.  Kroenke sees professional sports franchises (he owns several) as valuable tenants, and the question of whether the Rams will be a more valuable tenant in Los Angeles or St. Louis doesn’t require an MBA to answer.  The economy in St. Louis is foundering while LA boasts the third largest municipal economic machine on the planet.

6 – Governments in Indianapolis are built to do business.  If the mayor of Indianapolis wants to meet with the governor, he can walk a couple of blocks to his State Capitol office – or vice versa.  When the guy who runs Indy wants to talk to the guy who runs Marion County, he can do it in the shower, at the dinner table, or in the car on his way to work because he is the same guy.  In St. Louis, the city and county governments are separate, while the State Capitol is in Jefferson City is 132 miles away.  Part of the St. Louis metro is actually in Illinois.  Indy = simple and efficient.  St. Louis = complicated and multi-layered.

5 – St. Louisans didn’t see Jones Dome as a dump.  When I moved to St. Louis, I walked through the Rams home stadium, and found it lacking many of the amenities and square footage of newer buildings like Lucas Oil Stadium.  When I was told about the crazy clause in the lease between the Rams and St. Louis that required the Rams home to be ranked in the top eight facilities in the NFL every 10 years, an eventual move seemed unavoidable.  When I spoke to smart St. Louisans who didn’t see the Jones Dome as comparatively flawed, that spelled doom.

4 – Indy understood it is easier to keep a team than get one.  When the Colts asked for a new stadium, Indianapolis responded quickly and decisively.  Sure, there were occasionally contentious negotiations, but this city understood the need to get something done.  When presented with a similar dilemma, St. Louis basically handed Kroenke a loaded pistol and dared him to shoot.  When the Rams proposed a $720 million renovation for the Jones Dome as part of contractually mandated arbitration, St. Louis countered with $120 million in upgrades.  Kroenke stopped taking St. Louis seriously at that moment.  Keeping the Rams would have cost St. Louis $720M.  That amount escalated when the city offered to build a new stadium for $1.2 billion.  To lure the Raiders, it will cost yet more.  Much more.

3 – Indy remembers what it’s like not to have major league sports.  St. Louis has had a major league baseball team since 1892 when the team we know now as the Cardinals joined the National League.  No matter what happens, the Cardinals will always call St. Louis home.  Indianapolis knows the difference between being India-no-place and the dynamic town it has become because of sports as an economic driver.  No way Indy was going to take a step back to its depressed past.

2 – Colts were good during crisis while Rams losing pushed STL fans to indifference.  The Colts were on the precipice of a great era as Irsay and the Colts negotiated.  Peyton Manning was a young future hall of famer, and Bill Polian was pulling off one superior draft after another.  Sure, the Colts backslid to 6-10 in 2001, but the course to a Super Bowl appeared to be clear in 2002.  The Rams have not enjoyed a winning season since 2003, and the future is as bleak as its recent mediocre past.  Nothing like bad football for 12 straight seasons to disincentivize city taxpayers from quickly agreeing to write giant checks to build a new stadium.

1 – Indy acted decisively while St. Louis fiddled.  In 2012, St. Louis could have temporarily kept the Rams by agreeing to their plan to renovate the Jones Dome, but in 2025 the top eight stadiums clause would have again be used by the Rams to pry more cash from an economically strapped area.  That, coupled with the malaise caused by more than a decade of bad football, kept St. Louis from aggressively pursuing a solution.  In Indy, heaven and earth was moved quickly to satisfy everyone involved.

It’s a shame that the Rams are abandoning a fanbase that supported bad football with their hearts and cash, but there was almost no way to stop the inertia toward moving once it started in earnest.

If there is a next time for the Gateway to the West to become an NFL town, they need to be careful what promises are made to get that initial deal done.  And for goodness sake, unify the city and county governments, or no one with the option to do business with Indy will choose St. Louis.