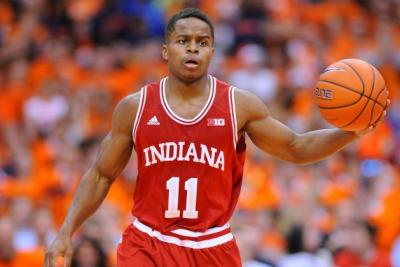 Yogi Ferrell may have found the right combination of confidence and leadership – or maybe Indiana’s 5-0 start is the result of their schedule.

If Indiana beats Illinois tonight at Assembly Hall in Bloomington, the Hoosiers will have put together a 6-0 Big Ten start for the first time in the Tom Crean era.

There was a bit of panic among Hoosiers fans after a two-loss trip to Maui and a less than competitive trip to Duke, but Indiana has bounced back strong in what has been a wacky college basketball season so far.

Without a loss since that December 2 visit to Durham, Indiana fans are wondering just how Indiana has found a way to win 10 straight despite some clear limitations.

Here are the top 10 reasons Indiana is very likely to finish today with an 11th straight win:

10 – James Blackmon Jr. injury.  It’s callous to suggest addition by subtraction has taken place following Blackmon’s knee injury, but there is no question the level of team defense has improved with Blackmon removed from the rotation.  Blackmon is an elite shooter and scorer, but his defense has not been good since arriving in Bloomington.  I don’t believe it’s a matter of effort for Blackmon, but an injury-driven lack of lateral quickness that keeps him from staying with his man.  No blame assigned to Blackmon here, just an acknowledgement that Indiana is better defensively now than before Blackmon’s surgery.

9 – Losses in Maui and at Duke got attention.  The three early losses exposed weaknesses that needed to be addressed.  The arrogance that has embodied Indiana Basketball under Tom Crean since the end of the 2013 season seemed – even to players and Crean – to be ill-invested.  Since the loss to Duke, the Hoosiers’ record is unblemished.  It’s possible that after the Duke game, everyone involved with the basketball program embraced a more humble manner of approaching the business of preparing for and winning basketball games.

8 – Less histrionics.  There seems to be a little less chest thumping by Hoosiers, which leads smart people to believe that Indiana is suddenly more concerned with what’s coming than celebrating what has been.  That focus and resolve leads to success.

7 – Level of competition has flattened.  Duke has lost three straight against unranked opponents.  Northern Iowa beat #1 North Carolina.  Kentucky lost to Auburn.  Valpo’s RPI is ranked 21st while Monmouth is #23.  The talent in college hoops has flattened, and that means the dominance of the Power Five Conferences is no longer a valid conceit.  The Big East, Missouri Valley, and even Horizon League are capable of playing outstanding basketball.  Rutgers and Minnesota are not only bad Big 10 teams – they would be bad Horizon League teams too.

6 – Defensive schemes have been simplified.  Not even sure whether it’s a valid comment because IU hasn’t played a good team in a while, but the defense seems more cohesive.  For two-and-a-half years, Indiana players have played both man and zone simultaneously with predictably horrifying results.  If it’s continuing, Rutgers, Nebraska, Wisconsin, Ohio State, and Minnesota have not attacked it well.

5 – Senior Yogi Ferrell’s light has finally gone on.  Again, it may be the results driving perception, but Yogi appears to be making better decisions offensively while playing significantly improved defense.  He’s always been capable, but maybe as his Indiana career comes to a close, Yogi has decided to bring his best self to games and practice.

4 – Wins begat more wins.  Learning how to win is a very important factor in winning.  Believing that you can win is a big step toward actually winning.  Indiana’s wins – regardless of the quality of the opponent – can give them faith, and that might be the difference in February when the games are no longer against conference patsies.

3 – Freshmen have matured.  Thomas Bryant is defending without fouling, and that shows maturity.  In seven December games, Bryant averaged three fouls per game.  During January, he hasn’t committed more than two fouls in any of the four games.  That may have something to do with the level of competition, but numbers are numbers.  Bryant’s emotional outbursts have been seen as playful passion during wins.  If he remains volatile when the competition stiffens, fans may start to appreciate it less as the results reveal it as a problem.

2 – More minutes for OG Anunoby.  Don’t mistake my appreciation for Anunoby for his coronation as a magical presence on the floor, but he defends (a rare attribute for an Indiana player), rebounds, and is rarely responsible for a negative play.  In the three losses to Wake Forest, UNLV, and Duke, Anunoby played a total of 13 minutes.  In the five Big Ten wins, he has averaged just over 15 minutes per game.

1 – Strength of schedule.  Including tonight’s game against Illinois, Indiana has avoided all five Big Ten teams with RPIs (in parentheses) ranked in the top 40 – Iowa (8), Maryland (12), Michigan State (15), Purdue (30), and Michigan (37).  The six opponents they have played have been mediocre to poor – Ohio State (73), Wisconsin (91), Illinois (119), Nebraska (176), Minnesota (218), and Rutgers (241).  Oddly, the three worst teams in the Big Ten have been Indiana’s road opponents.  The Hoosiers only play Michigan State, Purdue, and Maryland once this season, and none of those three before Valentine’s Day.

The biggest problem for Tom Crean right now is living up to the expectations his team’s early success is prompting.  February is going to be a huge month for the Hoosiers – a month when dreams will either come true or a season turns south.

It’s going to be a fascinating ride.