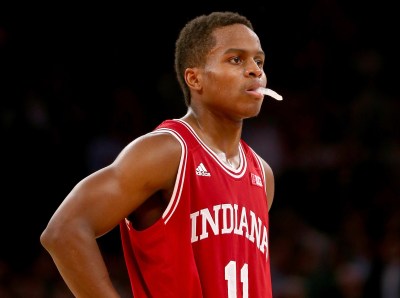 Yogi Ferrell has become an effective leader for the Hoosiers as they battle for a Big Ten title.

Indiana built a 16-point first half lead last night, lost it very quickly, and righted the ship to win by seven over Big Ten leading Iowa.  If you went to bed and 9:30p, you think Indiana can go to the Final Four.  If you watched from 9:30p to 10:30p, you think IU would be lucky to win a game in the NIT.  If you got home at 10:30p and watched the last 10 minutes, you believe the Hoosiers will win the Big Ten.

The jury of Indiana fans has always been split on Tom Crean as the leader of Indiana Universities most important vehicle for brand awareness, but this team has embodied an extension of that duality.  Fans love the Hoosiers.  Fans are frustrated by the Hoosiers.

Here are the top 10 reasons why Indiana is worthy of both admiration AND frustration:

10 – GO IU – Good Troy Williams.  Troy is capable of highlight reel dunks, disruptive defense, and functioning as part of a team that can overwhelm opponents by quickly turning aggressive defense into efficient offense.  As a rebounder, Troy can change a game.  His five offensive rebounds both last night against Iowa and Notre Dame (IU’s two biggest wins) changed those games.

9 – UH-OH IU – Bad Troy Williams.  As any Indiana fan can tell you, Williams deciding he has mad handles is self-confidence misplaced.  He has had a clean slate in turnovers during only one game this season, and has notched three or more in 13 games.  For every play that results in a Top 10 worthy highlight, there seem to be two that result in a sloppy pass or steal for the opponent.

8 – GO IU – Yogi Ferrell’s growth as player and leader.  Less than two years ago, Yogi was arrested at Kilroy’s Sports Bar with freshman Stanford Robinson.  He was two weeks shy of his 21st birthday.  He had yet to turn his teammates’ affection into respect.  College is about development, learning, and maturity, and it appears Yogi has the ear of his team in a way that he didn’t until this season.  With Yogi as an effective leader, Indiana seems to have answers for adversity they did not in seasons past.

7 – UH-OH IU – Defensive lapses.  Gone are the possessions when three Hoosiers are in zone while the other two play man, but there are still moments when Indiana players lose their way, assignments go unfilled, and buckets rain down from opponents.  Last night while in a 2-3 zone, Ferrell turned his back to the top of the key, Jerrod Uthoff caught, fired, and hit a three-pointer.  It happens less than it used to, but there are still stretches when Indiana appears disinterested in defense.  Even with those lapses, IU’s defensive efficiency ranks second in the Big Ten.

6 – GO IU – Offensive firepower.  When the Hoosiers get it rolling, they can be awesome.  Despite leading the Big Ten in turnover percentage, they are third in offensive efficiency.  What does that mean? Indiana makes shots.  As of today, IU leads college basketball in effective field goal percentage at 59.3%.  No opponent lead is safe when IU can stack made shots like they can.

5 – UH-OH IU – Off-court shenanigans only six months ago.  We tend to think that the spate of misbehavior for IU players is a thing of the past, but the truth is the last incident with Emmitt Holt and Thomas Bryant in the parking lot of the old Kenny’s Convenient Store with big bottle of vodka was less than six months ago.  Maybe that means the players embrace the boundaries established by law and athletic department pleas for keeping their noses (and livers) clean.  We’ll trust that it does until proven wrong.

4 – GO IU – Hey, 10-2 in the Big Ten is 10-2 in the Big Ten.  Sure, Indiana has played by far the easiest schedule in the Big Ten to this point, but teams can only play who is on the schedule.  Don’t hold Crean or Indiana responsible for their conference record.  Starting with last night’s win over Iowa, the schedule gets tougher, and to win the Big Ten title Indiana is going to have to compete against Michigan State, Purdue, Maryland, and Iowa again (as well as Nebraska and Illinois).

3 – UH-OH IU – Tom Crean’s lack of definitive style.  What does a Tom Crean team do?  With most coaches, there is a DNA that unmistakably announces his or her core basketball beliefs.  Not with Crean and IU.  Defense?  Could be zone, man, or some unholy hybrid.  Offense?  Push the ball and hit open threes?  Hell, I can coach kids to do that.  Everyone runs an offense predicated on multiple ball screens, so that’s not an original idea.  Crean’s behavior on the sidelines is more easily described than what his team consistently does.

2 – GO IU – 28-0 and 14-2.  Indiana crushed Michigan offensively and suffocated them defensively in Ann Arbor during a 25-0 run to end the first half that was extended to 28-0 by scoring the first three points of the second half.  Against Iowa last night, the Hoosiers turned a 60-56 deficit into a 70-62 lead by forcing Iowa into four missed shots and two turnovers which turned into six straight made shots on offense.  Indiana is capable of great stretches that leave opponents wondering what the hell just happened.

1 – UH-OH IU – Good is the enemy of great.  Indiana has been mediocre to good during each of the last five seasons under Crean.  They won a Big Ten regular season title in 2013, and have advanced to two Sweet Sixteens during this era.  That isn’t enough to quench fans’ thirst for success.  If this season brings another top four finish in the Big Ten and brief stay in the NCAA Tournament, that will continue to reaffirm in the minds of fans that IU is what it is – a good Big Ten team whose footprint of national relevance is eroding.  If they make a run during March that ends in Houston, recalibration will be required.  Right now, IU fails to satisfy fans who lust for a sixth banner on the end of Assembly Hall where they hang the important ones.