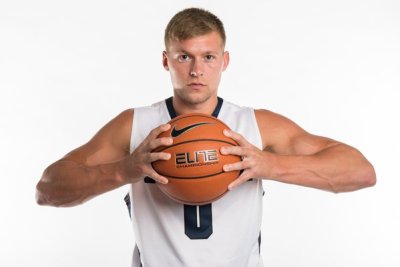 We might have forgotten that Austin Etherington can shoot. Good thing Austin didn’t.

Going into last night’s game against Creighton, Butler’s Austin Etherington had scored in double figures exactly once in his five years as a college basketball career.  Needing a win in the worst way, Etherington rained down 17 points to lead the Bulldogs to an 88-75 victory.

None of the shots made ESPN’s Sportscenter, but Etherington’s performance was among the most important and definitely the least likely of the night.

It’s not that Etherington isn’t a capable scorer; it’s that we haven’t seen him shoot like that since he was a senior at Hamilton Heights High School in 2011.

Etherington is one of my favorite guys in college basketball, and to see him enjoy a night like that in a crucial game validated my faith that good things happen to good people when they work hard and long enough.

Here are the 10 reasons I was absolutely thrilled for Etherington last night:

10 – Injury has never kept Etherington from pursuing his dream.  Back issues, knee surgery, and assorted other aches and pains have never kept Etherington from pursuing his dream.  Rehab is a lonely pursuit without immediate reward.  It’s a painstaking process that may or may not eventually payoff.  Etherington has worked through his issues not in the hopes of having a night like last night, but because working hard is what he does.  A reward like last night is sweet though.

9 – Etherington is a glue guy.  There are some athletes – or employees – whose primary contribution is not necessarily in what they can get done under the bright lights.  They reinforce a culture of hard work and team-first behavior.  Etherington has always been one of the guys who infuse a team with diligence and camaraderie.

8 – He is a testament to the wisdom of the grad transfer rule.  The decision high school seniors make to attend a university and play for a coach is not always the right one.  If they get their degrees with eligibility remaining, the NCAA allows them to revisit it to enjoy playing and studying somewhere else immediately.  Etherington took advantage of that rule to follow in his Dad’s footsteps to Butler (where he played from 1987-1991) from Indiana, and has never looked back.

7 – Battling LeBryan Nash in an Indianapolis Summer Tournament.  The first time I saw Etherington play was for Indiana Elite against a Dallas team that featured top 10 recruit Le’Bryan Nash, who went on to underachieve for Oklahoma State.  Etherington was shorter, thinner, and less athletic than Nash, but he was a superior competitor who banged, poked, and prodded the highly touted Nash to the point where he virtually stopped playing.

6 – Etherington is even a good guy when lying to the media.  After his last game with Indiana two years ago at the Big Ten Tournament, I asked about him being a leader for the Hoosiers next season.  He claimed to be looking forward to the challenge, and then almost immediately announced his transfer to Butler.  I normally don’t like being lied to, but telling the truth in that circumstance would have been ridiculous.

5 – Was generous with his time as a Hamilton Heights senior-to-be.  Before hosting a radio show, I used to interview people on video for this website.  After committing to IU, Etherington was very generous with his time in talking to me for almost an hour.  He was open, honest, and trusted me to represent him well (see below for a piece of the talk).

4 – 17 points in 17 minutes as Etherington rises to the occasion.  On a night when the Bulldogs absolutely had to have a win, Etherington reached into his long dormant offensive bag of tricks to give Butler an unexpected push.  Usually a hustle guy who defends, Etherington found a way to score a point per minute like he often did at Hamilton Heights.  When the story of the 2016 Butler team is written, Kellen Dunham, Kelon Martin, and Roosevelt Jones will have their own chapters, but Etherington’s unexpected offensive excellence might have been the difference between a trip to the NCAA and NIT.

3 – Etherington got a flush last night to go with his long distance calls.  Twelve of Etherington’s points last night came on four three-pointers in five attempts.  There were three free throws too.  The two points left over came on a reminder that the white kid who can shoot and defend is also capable of occasional elevation that allows him to dunk with a little ferocity.  This wasn’t an Aaron Gordon special, but it was a message that Etherington isn’t quite ready for the industrial league.

2 – In an era when one-and-dones get all the love, Etherington is a hardworking five-and-done.  Etherington found a way to be the most efficient player on the court las night in a game between two major conference teams looking forward to playing in the NCAA Tournament.  He got no run on ESPN for his effort as he is as unlikely as I am to play in the NBA, but there was no player in college basketball more important last night.  He plays because he loves to.  Nice to see people like that taste success.

1 – He’s first into Hinkle for practice.  Showing up early for a chance to get better is a big deal for me, whatever the vocation.  When I come to Hinkle Fieldhouse for pre-practice interviews, Etherington is always getting shots up before anyone else.  Work hard, and your chance will come.  Last night was Etherington’s chance, and he took advantage of it.  Without him getting up all those extra shots, Butler’s chances to play in the NCAA Tournament might have taken a serious hit last night.

Here’s Austin in a piece from the interview almost six years ago.