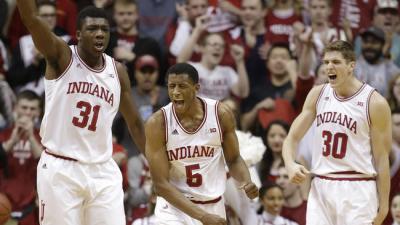 Indiana is rolling right now and Thomas Bryant, Troy Williams, and Collin Hartman are happy, but the season isn’t over yet.

Indiana won again last night.  They beat a short-staffed Nebraska team at Assembly Hall by 16, but a win is a win and because they have won 11 of 14 Big Ten games, the Hoosiers are tied for the conference lead with just four games left to play.

Some fans and media folks, including me, have been slow to climb aboard the Hoosier Express – a bandwagon that many are starting to believe will carry them all the way to the Final Four in Houston.

For every big win, like the thrashing of Michigan in Ann Arbor, there is a loss like the game at Penn State that perplexes.

There are plenty of questions about this Hoosiers team, but as we enter late February, there are also some answers.

Here are the top 10 burning questions about the Hoosiers – along with some answers:

10 – Has Tom Crean improved as a coach 17 years into his career?  It seems he has.  Gone are the complicated defensive schemes that seemed to scream, “Hey, look how smart the coach of this team is!”  Cream seems to have embraced the axiom that simple strategies are easier to consistently execute.  That shows confidence, which leads to improvement.  Crean always seemed to be a guy who is compelled to yammer on and on as though the more he talks, the more sense he makes.  This year, he’s allowing Yogi Ferrell to run the occasional timeout.  That shows growth too.

9 – Are fans at Assembly Hall due credit for the undefeated home record?  When I talk to players from opposing teams, I nose around about to find out what it’s like to play on the road.  Assembly Hall is always mentioned as one of the toughest places to play because of the energy the crowd exudes.  They say it is unsettling, so yes, the crowd when it is fully engaged deserves some credit.

8 – Is Indiana’s success in part due to the absence of James Blackmon Jr.?  As unpleasant a concept as this may be for Blackmon to embrace, the answer is yes.  Indiana’s defense took a massive step forward when Blackmon underwent season-ending surgery on his knee.  That doesn’t mean he won’t be a very important piece of the puzzle next year, but for this season, the Hoosiers function better without him.

7 – Can Indiana win big without recruiting the very best players in Indiana?  I don’t think so.  As much as we enjoy living here, I would bet 35 of the top 50 ranked high school players in America couldn’t identify Indiana on a map.  The days when Indiana regularly contended for a National Championship ended almost 25 years ago.  Indiana kids know basketball, and we are entering another snapshot in time when great players are being produced by the state that basketball calls home.  Recruit Indiana well = hang a banner is not a perfect equation, but it’s the only recipe for sustained success at IU, Purdue, or Butler.  Look at the way Ball State has pivoted by recruiting Indiana.

6 – If Brad Stevens was Indiana’s coach (given the same results), would IU fans be campaigning for him as National Coach of the Year?  This is the question that keeps ringing in my head as I examine whether my unease with Crean is fair.  The answer to the question is not before we know how the season ends, but how much of the impatience with Crean as a coach is really with Crean as a person is a question disgruntled fans need to answer.  People here like Brad in a way they don’t like Crean, but does that negate Crean’s success as a coach?

5 – Given their remaining schedule, can Indiana hang on to earn a share of the regular season Big Ten Championship?  Sure they can.  They play Purdue and Maryland at Assembly Hall, and Iowa and Illinois on the road.  According to Ken Pomeroy, Indiana has a 64% likelihood of beating Purdue, a 73% chance to beat Illinois, and a 62% chance to finish the regular season with a win against Maryland.  Iowa at Iowa is a different issue – only a 26% chance of posting a W there.  Iowa plays Michigan and Ohio State on the road, and after watching them lose at Penn State last night, it seems likely they will lose one of those games.  IU can get there, but will they? That’s a different question.

4 – Will Thomas Bryant opt to leave IU for the NBA?  ESPN’s Chad Ford has Bryant being selected with the 20th pick to the Detroit Pistons, but he’s a project.  The question for Bryant is whether the gifted and long power forward would enjoy improving while playing big minutes at Indiana or sitting the bench in the NBA.  His feet are slow, his defensive recognition weak, and athleticism stiff.  He’ll improve more quickly in the NBA than at Indiana, but it won’t be as much fun.  The rule is if you project solidly in the first round, jump.  We’ll see where he is after NBA scouts get a good look at him.

3 – Can this year’s success be sustained in March – away from Assembly Hall?  Indiana is undefeated at home, but three months ago lost on a neutral court to Wake Forest and UNLV..  Capable of a great game, Indiana also has the ability to play down to its competition.  Indiana might win the Big Ten, but getting cocky doesn’t suit them – especially this year when there is such parity in college hoops.  No team in college basketball looks capable of winning six straight games, but somebody will.  Why not IU?

2 – Did Yogi Ferrell make the right choice to stay at Indiana?  No, he didn’t – not because he stuck around for his senior season, but because there was no choice to make.  Declaring for the NBA Draft and then not being chosen would have been a disaster and that was the likely outcome.  Yogi’s NBA stock might not be much improved as a result of playing a fourth year in Bloomington, but he is exerting leadership that will serve him very well throughout his life.  Yogi is taking full advantage of his final year at IU, but that doesn’t mean he had a choice.

1 – Should Tom Crean be offered an extension as coach?  For the love of God, no.  A contract is a contract, and Crean is signed through 2019-2020.  That’s another four years, which is plenty of cushion.  As good as Indiana has been this season, it hasn’t concluded.  Nobody knows what is going to happen during March.  Even if the Hoosiers make a good showing in the Big Ten and NCAA Tournaments, there is no reason to rush into another contract with an additional round of insane buyouts.  It should take more than one respectable year in three to get a deal that stretches beyond 2020.

Kent Sterling hosts a sportstalk show on CBS Sports 1430 in Indianapolis every weekday from 3p-6p.