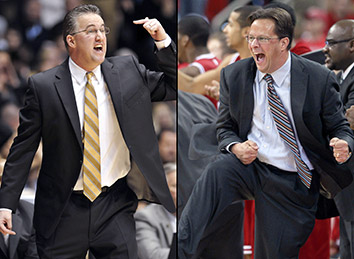 Matt Painter and Tom Crean both need a win for their programs tomorrow night. Can’t wait.

The Hoosiers and Boilermakers aren’t exactly the Tar Heels and Blue Devils, but it has been a great rivalry on and off for more than a century.

Bob Knight throwing the chair, John Wooden playing for Piggy Lambert, the donkey on Knight’s TV show, Brad Miller and Steve Scheffler throwing forearm shivers to the throats of Hoosiers, Jay Edwards hitting a game-winner at Assembly Hall in 1989, Indiana winning the NIT in 1979 over Purdue and Purdue returning the postseason favor in 1980 by eliminating Indiana from the NCAA Tournament are but a few of the highlights of this historic programs.

Indiana and Purdue play basketball against each other at least once a year, and tomorrow is the lone regular season game between the two rivals for 2016

Regardless of the circumstance, it”s always fun to watch these two teams battle.

But this year, the stakes are extreme.

Here are the Top 10 reasons why this game might be the best renewal of the rivalry in 20 years:

9 – Tom Crean is still coaching for his job.  People might be smiling in Bloomington right now because of nearly six months of police action-free behavior by the basketball team and their perch tied atop the Big Ten, but losing three of their remaining four, plus a wash out in the Big 10 and NCAA Tournaments might be enough to push Crean out the door.  A win against Purdue would validate the Hoosiers win over Iowa and give them a 13-5 league record at worst, which might be enough to mandate another year of the status quo.

8 – This might be the last qualitative syncopation of these programs for awhile.  With key components exhausting their eligibility or choosing to play for cash in the NBA, both Indiana and Purdue could take steps back next year.

7 – Assembly Hall will never be the same.  The renovation of Indiana’s grand basketball hall will be completed by the time the time these two teams play again, and the inside of the place will not look the same.  As the building evolves toward being more modern, the memories of both Bob Knight and Gene Keady harrumphing along the sidelines will fade.  Prior to this $47 million project, the building hardly changed a bit from this magical days and nights in the 1980s and 1990s when these who without question the top two programs in the Big 10.

6 – Purdue has had a tough road for nearly 20 years.  Before this recent renaissance, Purdue has been mostly mediocre back to the end of the three-peat that was concluded in 1996.  The brief return to prominence fueled by the great 2007 recruiting class of 2007 (Robbie Hummel, E’twain Moore, JaJuan Johnson, and the briefly tantalizing Scott Martin), was followed by yet another regression.  Now, the Boilermakers have size, tenacity, and shooters.  In short, they look like Purdue again.  Minus eight years ago today, when both IU and Purdue were both ranked in the top 15 during their only matchup that season (Sampson’s last as coach), Purdue and IU haven’t been good at at the same time since the Earth cooled.

5 – Indiana was irrelevant from 1997-2001, 2003-2007, and 2009-2011.  I’m giving IU the benefit of the doubt by not including the past two seasons among those in which they were entirely irrelevant.  Despite the five banners, 11 Big 10 titles under Bob Knight, one each for Mike Davis and Tom Crean, Indiana is not a place where titles have come easy or often since 1993.  Beating Purdue would validate the Hoosiers insistence their success is not a creation of what to this point has been a (mostly) weak schedule.

4 – Seniors.  Purdue has Rapheal Davis, A.J. Hammons and Jon McKeemon (Johnny Hill is a senior transfer and doesn’t count as a senior who is emotionally invested in this rivalry game). Indiana has Yogi Ferrell, Nick Zeisloft, and Ryan Burton (Max Bielfeldt? – see Johnny Hill).  Unless these two teams play during the Big Ten Tourney in Indianapolis next month, this will by the last chapter of this great rivalry these players will enjoy/endure.

3 – Only one matchup this year.  It’s unfortunate the Big Ten allows wacky unbalanced scheduling through its basketball season, but the result this season is that Purdue and Indiana play each other only once.  Purdue filled its schedule with such dynamic opponents as Incarnate Word, Old Dominion, and Lehigh.  Indiana spent November and December playing programs like Austin Peay, Alcorn State, and McNeese State.  Listening to explanations why IU and Purdue can only play once because Wofford is available for a November game makes my brain hurt.  Regardless, the Hoosiers and Boilers are going at it for the only time tomorrow.  [Ed. note: This is a garbage reason – interest in a second game would be fueled by a first matchup.  It would give the second more context and would thus be more interesting.]

2 – Purdue could still win the Big Ten.  Granted, it’s a long way to a Big Ten regular season championship for Purdue.  After losing to Penn State Wednesday night, Iowa has three conference losses, and the Boilermakers have five.  With only four to play, down two games leaves little room for hope, but if Purdue can beat IU and the Indiana beats Iowa, the math gets less challenging.  If Purdue beats Indiana, they pick up a game on the co-leader.  Then, all those fans who incessantly yell “Boiler up!” during games will be forced into becoming Indiana fans when IU and Iowa play on March 1.

1 – Hoosiers control their own Big 10 destiny.  If Indiana can beat Purdue, and follow that up with wins at Iowa and in Assembly Hall against Maryland (taking Illinois for granted at their place is a luxury we can afford but the Hoosiers cannot) in the regular season finale would give IU its second stand alone Big Ten title in over 20 years.  It all starts Saturday against Purdue.

2 thoughts on “Top 10 reasons Saturday’s game might be the best renewal of the IU vs. Purdue rivalry in over 20 years”