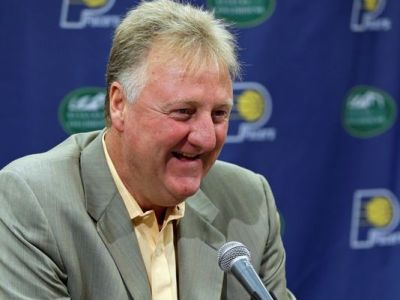 Whether Larry Bird is smiling during the fast-approaching offseason will depend on his ability to add a quality big and little to his roster.

It’s easy to overreact to a debacle like last night’s Indiana Pacers loss to the Toronto Raptors.

The Pacers failed to compete and were never in the game.  From the brief moment the Pacers led 9-8 until the clock mercifully expired, the team assembled by Larry Bird and led by Frank Vogel failed to match the effort or execution of the Raptors.

Down 2-1, the Pacers still have chances to claw their way back into this series, but after last night – a night where the Pacers should have been able to pony up a great effort – it’s difficult to see a clear path to victory.

Weird things happen in sports, but the Pacers beating the Raptors three-out-of-four seems like a serious longshot.

if the Pacers can’t mount a comeback to extend this postseason to another series, a period of evaluation will follow – as it always does.  Questions will be asked, and answers will be proffered.

Let’s get a jump on the fun with the top 10 questions the Pacers will need to answer this summer:

10 – Can the roster be fixed through free agency?  The Pacers need a big, a true point guard, and have plenty of cap room – like every NBA team because the cap is popping way up this offseason.  Al Horford is the only free agent big that could be an immediate force.  At the point, maybe Ty Lawson is the answer.  He’s already on the roster, and has the level of speed needed to lead a transition offense.

9 – Why did David West leave?  West left eight figures on the table to join the San Antonio Spurs, so it sure wasn’t the cash.  It’s said that West wanted a chance to win a championship, and the Spurs offered that.  The Spurs also have a veteran locker room where West feels more at home. It’s hard to imagine a guy waving goodbye to $10M without being seriously annoyed by the experience he endured while a member of his former team.  What or who caused that annoyance, and can it be corrected?

8 – Are Frank Vogel and Larry Bird on the same page?  The question has existed since the season preview media availability where Bird said the Pacers were committed to stepping up the pace with Paul George playing the four.  Vogel immediately followed Bird at the podium, and said if the experiment failed, they could quickly switch back to a slow paced brand of basketball.  George popped in and said he would be willing to play the four now and then.  If Bird is committed to going small, is Vogel’s perceived lack of enthusiasm for it a problem?

7 – Are Monta Ellis’s positives worth the negatives?  Throughout the season, it has become clearer why the Warriors, Bucks, and Mavs have allowed Ellis to move on.  There are positives (steals, runners, smart passes) and negatives (defensive lapses, terrible passes, and a lot of whining to refs).  Ellis can win games, but he can lose games too, and you get the feeling watching him that there is no breaking him of bad habits.  Monte needs to be Monta.  Can Monta be a major piece of a championship equation?  He hasn’t been one yet.

6 – Has the team tuned out Vogel?  It doesn’t seem like they have, but Vogel has led the Pacers for 103 games more games than any other coach in the team’s NBA history.  Players tend to tune out a voice once they become conditioned to it.  If Vogel is replaced, it won’t be because the players no longer follow his instructions, but because Bird feels another coach’s basketball philosophy is more in line with his.

5 – How high is the ceiling for Myles Turner?  This question won’t be answered over one summer, but Turner’s development is a critical ingredient for the championship hopes of the Pacers for the next decade.  According to Pacers coaches, the ceiling is limitless.  “He’ll be an all-star and a winner,” Pacers assistant Dan Burke told me.

4 – Is Paul George an NBA alpha dog?  Getting a generational player in the NBA is not easy.  There is no doubt George will never be Michael Jordan – no one is or has been.  He might be a Scottie Pippen though, and a Pippen is pretty damn good.  The question becomes whether George can win a championship as the best player on his team.  We tend to forget that George is only 25 years old and approaching his prime.

3 – Is Frank Vogel a championship level coach?  Until a coach wins a championship, that is a question impossible to answer in the affirmative.  Even championship coaches seem to ascend to that status because of talent.  Phil Jackson won 11 rings – none without Michael, Shaq, or Kobe.  Red Auerbach is the gold standard of 1960s NBA coaches, right?  How would he be remembered without Bill Russell?  John Wooden was a fine coach until Lew Alcindor and Bill Walton came to Pauley Pavillion.  Then, he morphed into the wisest leader in the history of mankind – the Abe Lincoln of basketball.  Erik Spoelstra has two rings for crying out loud.  It’s not about the coach.  The NBA is a players league.

2 – Can Bird score a draft coup more often than every five years?  In 2005, the Pacers stole Danny Granger with the 17th overall pick.  In 2010, Bird grabbed Paul George at #10.  Last year, Myles Turner came to the Pacers at #11.  In between, there have been big misses – Tyler Hansbrough, Miles Plumlee, and the trade of Kawhi Leonard for George Hill (I love Hill, but Leonard is a two-time NBA Defensive Player of the Year).  The Pacers need to draft exceptionally well to compete.  Nobody is perfect, and Bird has the 20th pick in the 2016 draft, so at best the Pacers hope to get a project.

1 – Was this a season of transition toward greatness or a return to the norm?  If the Pacers are destined to win 45 games for the foreseeable future, is that a result worthy of our adoration?  This is not a very charismatic team, so winning will be needed to inspire fan affection.  Tickets still being available for tomorrow’s playoff game shows the disconnect between non-rabid fans and the roster.  There were a lot of new pieces to the puzzle this season, and with the addition of a big, maybe this group can gel.  Maybe not.

Lot of questions, and there are people making a lot of money trying to answer them for the Pacers.  Let’s hope they are right.