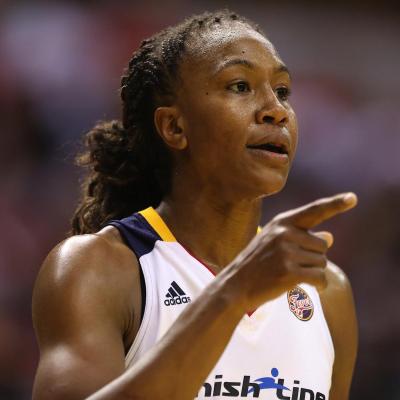 Tamika Catching points the way toward a championship and a better life for many in central Indiana.

Tamika Catchings is on of the best players in the history of the WNBA – an outstanding player who is capable of excellence as a scorer, rebounder, and defender.

But she is a better teammate and person.

There have been plenty of transcendent Indiana sports figures – Oscar Robertson, Peyton Manning, Reggie Miller, Slick Leonard, Bob Knight, Rick Mount, John Wooden, Knute Rockne, and plenty of others.  Catchings has earned her place among them through selfless excellence in 15 years as a member of the Indiana Fever, but more importantly as a force for good in the Indianapolis community.

Catchings has announced this will be her final season as a player for the Fever.  We are all lucky this won’t be her last year as a Hoosier.

Here are the top 10 reasons we need to appreciate this final season for a thoroughly unique force for good on and off the court:

10 – Catchings has given area players a supremely positive role model.  Manning is given great credit for elevating the level of interest in football for Indianapolis area kids.  As a result, Indy has become fertile recruiting soil for college football coaches.  The same credit should be lavished upon Catchings for serving as such a positive role model for female athletes in central Indiana.  If guys are paying any attention, they have learned a lot about basketball and life from Catchings as well.

9 – Came into the WNBA with a surgically repaired ACL.  Overcoming adversity is a recurring theme for Catchings (see #2), and it came early for her as a pro.  Catchings was forced to sit her first year with the Fever as the knee injury she suffered during her final season at Tennessee healed.  Because of Catchings diligent rehab work, she has become one of the greatest stars in WNBA history.

7 – Once scored a quintuple double.  According to her wiki page, Catchings was the first of two basketball players at any level to record a quintuple double (10 or more points, rebounds, assists, blocks, and steals) in a game.  That’s ridiculous.

6 – Leads by example.  The best kind of leaders not only talk a good game but lift his or her teammates by sacrificing for the good of the unit.  According to teammates and coaches, Catchings works with focus every minute everyday, and makes it impossible for her teammates not to.

5 – Catch the Stars Foundation.  Some athletes start a foundation because that’s what they are supposed to do, and then the foundations drift in dormancy.  Catchings works through the Catch the Stars Foundation to help Indianapolis kids in need with the same passion she brings to basketball.  Catchings doesn’t do it for brand building or some selfish goal, but for the good of the community.

4 – Still having great fun.  Even at media day, a chore for professional athletes who grow tired of being asked the same questions again and again, Catchings found a way to enjoy herself, and bring a smile to the faces of teammates and the media.  Catchings sets a great example for those who see every item on a to-do list as drudgery.  There is nothing that can’t be enjoyed, and if you don’t believe that – spend a few minutes with Catchings at media day.

3 – Competes hard at everything.  At the Indiana Fever bowling tournament last year, I watched Catchings bowl because it seemed a great opportunity to gauge her competitiveness when no one paid attention or really cared about the result.  She bowled last for her team, so during the 10th frame the game was on her ball.  She did the math, and realized her team was down 17 pins.  For the win, Catchings needed a mark and an eight count.  That was exactly what she got, and she celebrated like her team won the WNBA Championship.  Competitors love to win at basketball, bowling, tidily winks, bunko, or backgammon.  It’s not the game that matters; it’s the drive to win.

2 – Overcame adversity as a kid.  Catchings was born with a hearing loss that required her to wear a hearing aid as a kid.  She told me yesterday that she was mocked in school.  How does a person overcome adversity brought by bullying?  By working like hell.  For those fighting adversity, regardless of the source, hard work brings the best results.

1 – Continues to show up early and stay late.  Catchings is going to be 37 years old in two months, has won a WNBA championship, three Olympic gold medals, has been the WNBA MVP, and a five time defensive player of the year, but according to coach Stephanie White, “Catch continues to work like she might get cut.”  To work that hard requires a love for what you do and a unique level of discipline.  You don’t need to be a great athlete to mimic Catchings in those two areas.