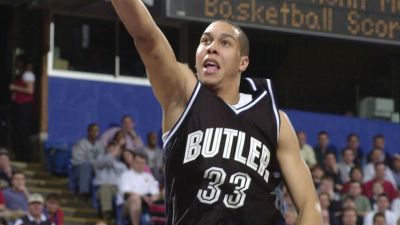 This is how we will remember Joel Cornette. Those who played with and coached him recall something much deeper about their friend.

For the third time in 2016, Butler’s basketball program has suffered a profound loss.

First came the expected but extremely sad passing of Andrew Smith, whose goodness and competitiveness forever endeared him to staff, teammates, and fans for the latter seven years of his way-too-short 25 year life.

Then we heard about “Little Em” Kampen, the six-month old son of staff member and former player Emerson Kampen.  He passed away having been victimized by a terminal genetic disease.

Yesterday, Joel Cornette died.  Joel was the heart and soul of the Bulldogs team that advanced to the Sweet 16 after beating Louisville in the 2003 NCAA Tournament.  He was only 35.

With every loss, we talk to teammates and coaches about how teammates, coaches, and others close to the program remember and honor those taken from us.  With every interview, we are reminded why the “Butler Way” is a very special ideology that benefits all who live under its umbrella – regardless of how long or brief the stay.

Here are the top 10 ways the Butler Way has brought a special environment to Butler University.

6 – It allows student-athletes to be students as well as athletes.  Maybe there are hundreds of coaches who would do what Brad Stevens did with his team as they advanced to back-to-back National Championship games in 2010 and 2011, but I’ve never heard of it.  Because academic requirements mandated some basketball players be in class all day beginning at 8:00 a.m., Brad held practices at 6:00 a.m, and on the day the Bulldogs played for the title, because the Final Four was held in Indy, players attended classes the day of the game.

5 – It enforces a passionate work ethic.  Hard work inspires more hard work, and after enough years of really hard work, it becomes a sincere and deeply embedded characteristic of a culture.  Butler has benefitted from hard work for better than 20 years, and the momentum toward maximum effort is so strong, that it’s impossible to imagine walking into Hinkle Fieldhouse without seeing basketball players busting their asses.  It works the other way too.  Without the efforts of guys like Cornette, Archey, Marshall, and the various Graves back in the day, there is no way the Bulldogs play in back-to-back National Championship games or migrate from the Horizon League to the Atlantic 10 to the Big East.

4 – It wins.  Culture is nice, but without winning, the architect of the culture is dispatched and suddenly there is a new genius with a detailed document explaining a new and improved culture.  As smart and positive as the Butler Way is, if Barry Collier hadn’t found a way to turn it into some w’s, we would have only a vague recollection as to who he was as he calls to sell us insurance.  Winning is a must, while everything else is nice.  The Butler Way wins.

3 – It passes from generation to generation.  Over the last 20 years, the Butler way has passed from the Graves Brothers and Mike Marshall to Rylan Hainje and LaVall Jordan to Joel Cornette, Darnell Archey, and Brandon Miller to Bruce Horan and Avery Sheets to A.J. Graves and Willie Veasley to Matt Howard, Zach Hahn, and Ronald Nored, to Shelvin Mack, Andrew Smith and Gordon Hayward to Kellen Dunham, Roosevelt Jones, and Alex Barlow.  That’s one hell of a lineage, and fans should expect it will continue.

2 – It provides a cultural template for recruiting.  “Yeah, he can play, but is he a Butler kid?” is a question asked relentlessly by Butler coaches as they evaluate recruits.  What a gift that is for coaches. It’s not just length and vertical leap at Butler that determines enthusiasm as players are evaluated, but a behavioral and work ethic standard that must be respected or the entire edifice crumbles.  A mandated behavioral filter is a wonderful tool for coaches.

1 – It binds players forever.  When I spoke yesterday with Darnell Archey on my radio show about the passing of his teammate and former coach Todd Lickliter about his player, his recollections sounded like they were from yesterday, not 15 years ago.  It’s easy to claim that tightness exists among teammates everywhere, but that is not the case.  At Butler, teammates become brothers, and the Bulldogs success is directly attributable to that bond.  Basketball is not exclusively about athleticism, length, and verticality.  It’s also about five players finding a way to play as one.

One thought on “Top six very, very good things about the Butler Way”