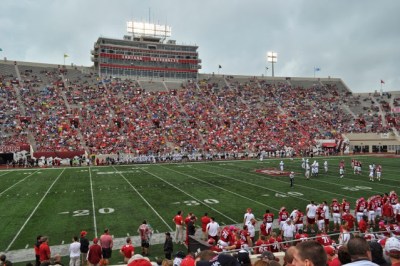 This is a crowd shot during the first half of an Indiana Football game. At least half those people will leave during halftime. And they won’t return.

Hard to blame Indiana University football coach Kevin Wilson for imploring fans to stick around for four quarters during games at Memorial Stadium.  If I could see half of the listeners flip their radios off at 4:30p, I would be disappointed too.

Wilson asked fans to stick around this Saturday as the Hoosiers face another must-win non-conference game (when you play in the Big 10 East, all non-conference games are must-win if Indiana is to feel good about its chances to qualify for a bowl), “Our last six games, we’ve won four and lost two (including one in) double overtime, so why don’t we hang around for four quarters and see what happens, have a lot of fun and make this an exciting atmosphere.”

Wilson explained his team’s mediocre finish against Ball State by making a joke about the fans’ penchant for leaving early, “We played the first three quarters good.  I don’t know if we had a lull. I think we probably played like our fans and just left in the fourth quarter, it looked like.”

There was also advice from Wilson as to how fans need to prepare for game day, “Those tailgates are still there.  If you buy a good enough cooler, stuff will stay cold for you. Let’s ride out the second half, man. Let’s play ball.”

Wilson is right.  It would be great if the fans stuck around.  But they don’t, and there are good reasons for the exodus that occurs each and every halftime that have nothing to do with the on-field product or Wilson.

When I go to games as a fan, I leave early.  It’s not a call made lightly, but it is an easy decision for the following eight reasons:

9 – Getting a wife or girlfriend to lock down for more than four hours in anything but perfect weather at a football game is impossible.  Sitting in the rain or cold or heat for a woman who is willing to come along to an Indiana Football game is not happening for most women.  That’s not a sexist comment, but an endorsement of their intellect.  When my wife asks, “Can we leave and go to the bar to get something to eat and watch the rest of the game on TV?”, I find her intellect dazzling.  My wife is a huge sports fan, but there are correctly imposed limits to her desire to sweat, freeze, or drip dry.

8 – Despite obvious advances, Indiana has posted one winning season since 1994.  I like Kevin Wilson, and believe the program continues to make strides toward being competitive with the elite of the Big 10.  Regardless, fans have yet to be convinced that sitting or standing for over four hours to enjoy both the beginning and finish of an Indiana Football game is a great investment of their time.

7 – Stroms at Nick’s are delicious.  Sustaining ourselves on hotdogs and nachos during a four-plus hour football game is unacceptable.  Leaving at halftime to watch the second half while wolfing down a stromboli is occasionally a superior option, and exercising that option must be respected.

6 – Construction on 37 makes getting to and from Bloomington a major pain in the ass.  Driving to Bloomington is not that tough because some want to get there early and others roll up closer to game time.  After the game, everyone leaves simultaneously, causing gridlock on the endlessly under construction connection between Bloomington and Indianapolis.  Leaving early can trim 90 minutes or more off that death march back to Marion County.  For students living in Briscoe, McNutt, and Foster, they have no such excuse.  For adults in Marion County, staying to the bitter end can waste hours.

5 – No beer in Memorial Stadium.  Life would be simpler and more productive without 52,000 football fans who insist on continuing to pour beer through their gullets as the Hoosiers play whomever, but that is what happens throughout the area surrounding Memorial Stadium on a game day.  Asking fans willing to end the party for the game to wait more than four hours for their next cold ale is asking a lot.

4 – Tailgate parties are a good time.  For decades, Indiana’s football bragging rights began and ended with the parties that preceded games.  That might not be the case anymore, but old habits die hard.  The parties have been the highlight of football Saturdays back to the days IU played at 10th Street Stadium.  Expecting the alums to pivot quickly toward embracing the actual game as the main event is asking too much.

3 – Hoosiers are social beasts.  Indiana students learn to enjoy each other’s company more completely than they embrace the official university curriculum.  It’s tough to carry on a legit conversation during a football game.  That’s best done in the parking lot, over a bucket at Nick’s, or on the Liar’s Bench at the former Kenny’s Food Mart.

2 – Losingest program in college football history.  Wilson is doing his best to turn the Hoosiers program around, and he’s getting closer and closer, but it’s impossible to erase our memory of decades of futility.  Generations of Indiana students and alums are so conditioned to anticipate failure they run from Memorial Stadium at the first sign of trouble.  Indiana is competitive today, but memories of disappointment die hard.

1 – Games are WAY too long.  Solving this problem would render all other issues moot.  If the games lasted three hours, as NFL games do, fans would likely stick for the entire four quarter event.  When the first half takes a full two hours, it is nearly impossible to avoid the temptation to leave for all the reasons listed above.  On TV, the marathon games are less problematic because of the ability to flip during commercials and distract ourselves with other activities.  As much as I enjoy Indiana Football, watching a game in person for four hours is more a task than a pleasant and thrilling diversion from life’s responsibilities.