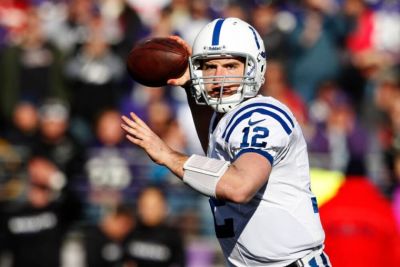 Andrew Luck leads the Colts to an early season (1st two games of a season) loss for the eighth time in 10 tries.

The 2016 Indianapolis Colts season appears to be little more than an extension to the disappointing 2015 season – one that began with Super Bowl dreams and ended with broken bones, torn ligaments, and a front office and coaching staff staring into the abyss.

General manager Ryan Grigson and head coach were saved from the gallows by a forgiving owner who believed they could find common ground and merge divergent philosophies to find a way to build a champion.

Two games into this messy campaign, the Colts are banged up and winless – a disappointment for fans who have known failure only three times in the 18 years.

Just two years ago, the Colts started 0-2 before righting the ship and marching into the AFC Championship, but while the math is equal, the situations are not.

Injuries, unpleasantness, and schematic oddities are the defining traits of this team, and just nine days into the season, many fans are screaming for a complete replate of the franchise from the front office to the coaching staff.

Here are the top 10 reasons demanding a clean sweep is premature after two games:

12 – What fun is losing faith on September 19th?  Sure, the Colts might be a 5-11 team when January 2, 2017, rolls around, but this is September 19th with 14 games looming on the horizon.  If the Colts can beat both the Chargers and Jaguars, they will be 2-2.  That would put the Colts in a position to attack the remaining 12 games with hope for postseason success.

10 – The only opinion that matters is that of owner Jim Irsay.  We might see flaws and warts, but none of them matter unless Irsay is in agreement.  Why waste our energy answering the question of the direction of the Colts when there is a one-man tribunal who will operate based upon his needs and desires.  We have opinions, and in this case, they are exactly as important in assessing the futures of Pagano and Grigson as that other thing that everyone has.

9 – Judging Colts offense based upon results against the Broncos is tough.  The Broncos have the most disruptive defense in the NFL, and the Colts were able to mount a 12-play and a 13-play touchdown drive in the second half.  That’s a glass half full way to look at yesterday’s effort against Denver, and we are all about being optimistic in this post!

8 – The banged up defense played the Broncos even up minus the two defensive touchdowns.  That’s a little like, “Other than that Mrs. Lincoln, how’d you like the play?” but given the injuries to all levels of the defense for the Colts, we knew that sifting through the rubble for positives would likely be necessary.

7 – Despite playing poorly, the Colts were in the game against the world champs with under two minutes left.  Down six with the ball and Andrew Luck in control of the offense isn’t a bad spot for a team that had been statistically dominated for the first three quarters.  The Colts could easily have been down by 20, but had fought hard enough to stay within striking distance against a fearsome defense.  That counts for something.

6 – The Colts are a bad timeout away from being 1-1, as predicted.  When people looked at the Colts schedule before the season, they assumed a win against the Lions at Lucas Oil Stadium and a loss against the Broncos in Denver.  If the Colts had taken a few more seconds before taking a timeout prior to scoring what should have been the winning touchdown, they fulfill expectations and would be looking at a winnable game at home against the Chargers followed by another winnable game against the Jaguars in London as a path to 3-1 during the first quarter of the season.

5 – 2016 draft showed growth over previous classes.  The 2013 Colts draft class has scattered to the four corners of their post-football careers, and the 2014 class is represented by only Jack Mewhort and Donte Moncrief.  But the 2016 draft appears to have brought a little bit more talent to to the aging Colts roster.  If the improvement in draft classes is systemic rather than simple good fortune, there may be more to come.  It’s possible that Grigson required a few years to learn how to manage a roster.

4 – The Colts still play in the AFC South.  While the Jaguars and Titans have improved, they are still more bad than good, which means the Colts have a reason to believe four of their remaining games are potential wins.  The Texans are rolling so far in 2016, but their wins have been by single digits against the Chiefs and Bears – not exactly Super Bowl favorites.

3 – Health needs to return before blame is assessed.  With so many cornerbacks and safeties on the shelf, what do fans expect of the Colts.  Even with that long list of injured defensive backs, the Colts margin of defeat yesterday was built by the Broncos through two defensive TDs.  If the Colts continue losing with Vontae Davis, Patrick Robinson, Clayton Geathers, Darius Butler, and T.J. Green healthy, that will be a good time to start thinking about what might be the next step in trying to build a team around Andrew Luck.

2 – Winless through two games is nothing new for Pagano and Colts.  Since taking the job to be the next head coach of the Colts, Pagano’s teams have posted a ghoulish 2-8 record in the first two games of the season.  During three of those seasons, the Colts went to the playoffs.

1 – Andrew Luck remains a top tier young quarterback.  The toughest piece of the puzzle for a championship football team to acquire is the quarterback, and the Colts have a potential great one.  Luck has all the tools necessary to lead the Colts to a Super Bowl, and as long as the job of building the Colts roster doesn’t involve replacing him, the Colts will be a couple of exceptional draft classes away from a championship.