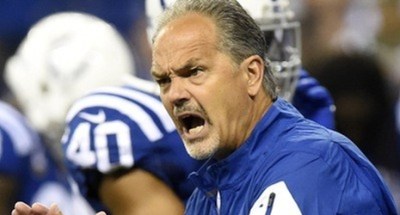 What can Chuck Pagano do to help the Colts win? Plenty, but it starts with telling the truth to fans through the media.

As ridiculous as it is to write on September 13th – less than 48 hours after game one of 16 – the clock is ticking loudly on the 2016 Indianapolis Colts season.

If Matt Prater’s game-winning 41-yard field goal had sailed left as it looked like it might, we would be having a different conversation, but it didn’t and so the warts of the Colts 39-35 loss are being reviewed and dissected as the Colts prepare to visit the defending Super Bowl champions.

That gives the Colts five days from right now to clear their heads, get healthy, and prepare for a different level of challenge.  Tall order for a team that lost to one of the NFL’s bottom feeders, allowing a mediocre offense to run up 37 points (the Lions offense does not get credit for the game ending safety).

Not a lot of time to fix a team that featured the best quarterback in week one of the NFL season and a bunch of guys.

Here are the top 10 challenges that require immediate or long-term attention from Colts players, coaches, and management in order to hang another championship banner at Lucas Oil Stadium:

10 – How about a 1,000 yard rusher for the Colts?  It’s been almost a decade since the Colts had a running back eclipse the 1,000 yard barrier during a season.  It’s unlikely to come this year as Frank Gore is the best bet, and would be the first man of his extreme years to run for a thousand yards since John Riggins more than 30 years ago.  Gore was effective Sunday, averaging 4.2 yards per carry, but with only 14 runs he fell short of the yardage needed to be on pace to hit that target.

9 – How about a 100 yard rusher in a game?  Not since 2012 when Vick Ballard did it have the Colts seen a back run for 100.  NFL teams don’t need a dominant back to win games or a championship, but just for optics’ sake it would be nice to see it happen so we can stop carping about this ignominious streak.

8 – Scouting and draft methodology must be retooled.  Maybe the issue with the Colts injury issues begin in scouting, and the dearth of effective defensive players is definitely a draft issue.  Something needs to be tweaked (I’m being kind) in the evaluation of collegiate players, who when drafted by the Colts either wash out or break down.  The 2013 class is entirely gone, and the 2014 first rounder was dealt for Trent Richardson, who was too fat to contribute in a meaningful way, according to teammates.  Free agency is to plug holes, while the draft must provide the long term strength of the roster.

7 – The crowd needs to find a reason to show up and get loud.  I know it’s tough to maintain much enthusiasm for a team that falls behind 21-3 to the Lions, but Lucas Oil Stadium needs to make opposing offenses uncomfortable even if the defensive pressure of the Colts front cannot.  Getting loud and staying loud makes a difference.  If you don’t believe me, catch a game in Seattle where the crowd noise has caused minor earthquakes.

6 – Have Luck run the offense exclusively from the shotgun.  Luck was 25-of-35 for 321 yards and four TDs Sunday while in the shotgun. He was 6-of-12 for 64 yards when taking a snap.  The Colts need to recognize what Luck does best, and put him in that position as often as possible.  The NFL, as former Colts offensive coordinator Tom Moore always said, is about players, not plays.

5 – Slow starts.  It seems the Colts offense never really gets cranked up until they play from behind and are freed up to attack.  Controlling the clock might be the right strategic call for a team with a defense like the Colts, but it does not allow the offensive players to flourish.  Andrew Luck was very nearly perfect Sunday throwing deep down the middle.  Turning Andrew loose might expose the Colts defense, but until it’s healthy, does it matter?

4 – Missed tackles.  Regardless of where a player is on the depth chart, he should be able to hit and finish a tackle.  If a third string linebacker can’t close quickly enough to get to the ball carrier, that’s understandable.  Being unable to finish a tackle is inexcusable for a pro.  The Lions gained 62.6% of their passing yards after the catch, and that is indicative of several problems, but missing tackles was chief among them.

3 – Relentless spate of injuries.  I don’t know if the Colts are doing anything wrong in preparing players to compete without injury, or if the incredible number of injuries suffered by their players is a historically horrific run of bad luck, but it needs to stop.  Winning while healthy given the Colts draft classes is tough enough.  Losing players like Vontae Davis, Henry Anderson, Clayton Geathers, D’Joun Smith, T.J. Green, Winston Guy, Darius Butler, and others crippled the defense against the Detroit Lions, and it will continue to.

2 – Putting pressure on opposing QBs.  In six quarters against starters, the starting defensive unit of the Colts made Matthew Stafford and Sam Bradford look like Joe Montana and Tom Brady.  That’s what NFL quarterbacks do when they are allowed to operate without being touched.  To win football games, quarterbacks must be made to feel uncomfortable.  Minus Robert Mathis and Kendall Langford (when healthy), the Colts have nothing for opposing QBs to fear.

1 – Honesty with fans.  Some would call this honesty with media, but the ears of the media represent those of the fans.  Pagano tends to alibi and obfuscate when simple honesty would represent a stronger form of leadership.  A great example occurred yesterday when Pagano said he would do the same thing in a situation like Sunday when he called a timeout with 1:15 left.  Doing the same thing again and again expecting a different result is a definition of insanity, and I don’t believe Pagano to be insane.  He made a clock management error, and hopefully learns from it despite his denial of wrongdoing.