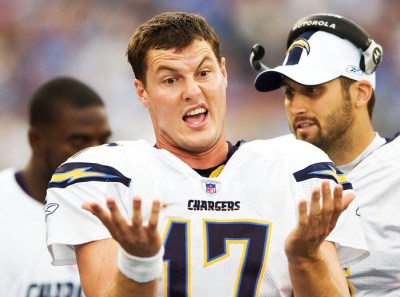 Philip Rivers is a player Colts fans hate because he seems to have the Colts number. They hope that will change Sunday.

The loss against the Lions was self-inflicted due to questionable clock management and a strange decision to gift wrap a free pass to the 25-yard line while trying to nurse a one-point lead with :35 left.

Against the Broncos, it was the 15 points generated by malfeasance authored by the Colts offense that closed the deal.

It’s time this team still harboring remote playoff aspirations finds a way to win a game it should after gift-wrapping two for opponents.

The Chargers present a unique set of challenges headlined by a quarterback that has been a relentless pain in the ass throughout his career against the Colts.  Philip Rivers has been an unsolvable riddle for three Colts coaches, including hall of famer Tony Dungy.

All that needs to change Sunday afternoon if the Colts are going to continue to talk playoffs with a straight face.

Here are 10 reasons it is going to happen:

10 – Urgency comes with an 0-2 record.  Making the playoffs after starting a season 0-2 is tough.  Doing it after going 0-3 is nearly impossible.  Granted, the Colts have all six games left against AFC South rivals, but even with the Texans offense looking inept and vexed against the Patriots last night, this isn’t the automatic 6-0 that it used to be.  Winning a game at home against an average team while their backs are up against a wall should be a given.

9 – Good Andrew seems to show up more often at Lucas Oil Stadium.  Luck was arguably the most productive quarterback in the NFL at home against the Lions in week one.  Last week in Denver, not so much.  Let’s hope that trend continues at least for this Sunday.

8 – Tackling can’t be a weakness forever, right?  Colts defensive coordinator Ted Monachino lamented the poor tackling by his defense when he spoke to the media yesterday, saying the Broncos got an additional 20 plays and 97 yards as a result of shoddy work doing the most important thing defensive players are paid to do.  If Monachino was talking to us about that poor effort, you can bet players heard all about it – at length and with volume.

7 – Colts are getting healthier.  To paraphrase Monachino yesterday – the more good players you have in the huddle, the better a team plays.  Yup.  And the Colts will welcome some defensive players back this week.  Clayton Geathers, Henry Anderson, and Patrick Robinson should be ready to roll, and that should help the Colts find their defensive mojo.  If Vontae Davis is available – all the better!

5 – Colts defense made strides last week.  Sure, the Colts lost to the Denver Broncos 34-20, but the Broncos defense scored 15 of those points with a pick six and a strip sack.  That means the Colts defense was able to limit the Broncos to one touchdown and four field goals.  They also were in a position to score on a pick six themselves until Darius Butler hurt his hamstring during the return.

4 – John Pagano is the Chargers defensive coordinator.  If blood is thicker than water, John should work just a little less hard this week to give his brother Chuck a little breathing room as he founders in his position as the head coach of the Colts.  Of course, that won’t happen.  Brothers love beating the hell out of each other as kids, and that won’t change as John and Chuck try to outsmart one another on the field this Sunday.  It would be nice though.

3 – Joe Barksdale.  I like Barksdale.  He’s a really nice guy – one of the Rams players I got to spend a little time with in St. Louis – but he is a thoroughly mediocre offensive lineman.  The Colts should be able to take advantage of Barksdale at right tackle to put pressure on Philip Rivers and limit running back Melvin Gordon to small gains.

2 – Colts receivers match up very well with Chargers defensive backs.  With Donte Moncrief on the shelf for 4-6 weeks with a broken scapula, the Colts don’t have a wideout with height or bulk.  Fortunately, the Chargers are very small at cornerback and safety.  The tallest starter is a safety with whom the Colts are very familiar – Dwight Lowery.  Expect T.Y. Hilton and Phillip Dorsett to have big days.

1 – Math.  No way the Colts lose all 16 games, right?.  They have to win at least a few times, and this is a game, so why not win Sunday?  Not unassailable reasoning, but it’s hard to fathom the Colts losing their first three games with two at home against mediocre opponents.  In addition, in their last seven games on the road the Chargers are 7-0 against the spread.  At a roulette wheel, black can pay forever!