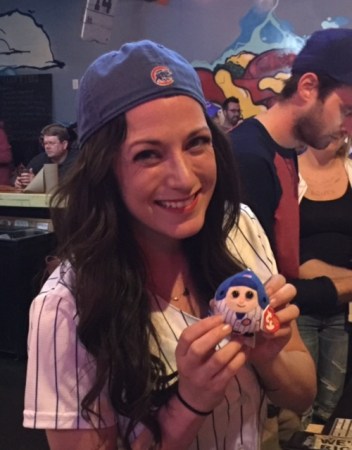 Our server at Fat Dan’s with my wife’s good luck Cubs beanie key chain. Moments after this pic was taken, the Cubs won and she repeatedly asked, “Is he OK?” as I wept.

So there I sat at Fan Dan’s in Broad Ripple Saturday night crying like a baby – weeping really – after the Chicago Cubs finished off the Los Angeles Dodgers in the National League Championship Series.

Time froze, so I’m unsure whether my unsightly emotional outburst lasted 30 seconds or 15 minutes.  All I know is that I couldn’t stop, and the flood of memories didn’t either.

I am very well aware that baseball is a silly game and the result of a contest featuring 50 players I have never met and do not know has no tangible bearing on my life.  So why the hell did the Cubs beating the Dodgers mean so much to me?

My Dad took me to my first game in 1968.  Ernie Banks hit a home run that afternoon in a 9-8 loss to the Cincinnati Reds.  I only know the Cubs lost because we listened to the last two innings on WGN Radio as we beat traffic by leaving after the seventh inning.

Not sure my Dad ever saw an eighth or ninth inning.

That’s how I got Fred Whitfield’s autograph instead of Pete Rose’s.

Every spring, Dad pulled me out of school to go to a Cubs game at Wrigley Field.  Those were good days.

When I was in high school, my family would visit Lake Bluff (the town where I grew up, exactly 31 miles north of Wrigley), and my friend Nick Anson (no relation to ancient Cubs great Cap Anson) and I would take the train to catch the Howard line.

We would sit and watch the Cubs of the late 1970s with Dave Kingman, Bill Buckner, Ray Burris, Willie Hernandez, Bruce Sutter, and Manny Trillo languish in mediocrity.  It was a fun adventure – the kind of fun most parents don’t allow kids these days.

It was my first time feeling a little bit like an adult, trusted to avoid the kind of decisions that might cause a kid to never find his way home.  Mom and Dad felt like Nick would keep me on the right track.  He was just a tad more adult-ish than I was.

We would go back to the players parking lot to get autographs as they left the clubhouse and got in their cars.  Each had a clear plastic cup full of beer as the drove away.  Even then, I thought that was weird.

Our son Ryan was born with Sepsis, so he had to stay in our apartment until he turned one month old.  On that day, Julie and I took Ryan to Wrigley for a doubleheader against the Dodgers.  Of course, the Cubs were swept.

Mom and Dad both came up for a night game right after the lights were installed.  Ryan was three months old, and wore a way too big Cubs hat while he slept on that Cold September night.

Countless afternoons for the next four summers, I threw Ryan on my shoulders for the six block walk from our apartment to Wrigley.  Many others, I joined friends Bill Pabst and John Lanctot in  some very special seats – front row, right behind the plate.  Living a bleacher bum life in the front row was very cool.

Because I went to a lot of Cubs games in 1989, the team offered me a chance to buy bleacher tickets for game six of the NLCS and game three of the World Series.  Of course, the Cubs were eliminated by the San Francisco Giants in five games and I never got to repay my Dad for the games we went to by taking him to a playoff or series game.

I re-created my Dad’s routine of pulling Ryan from school for a game every year despite making the move to Indianapolis when Ryan was about to turn five.

We became season ticket holders (night & weekends) in 2015 after my name finally bubbled to the top of the waiting list after eight years, and we make the drive to Chicago at least a couple of times a summer for a game and tour of our old neighborhood.

Wrigley Field is mostly unchanged from when I was a kid, especially from my seats in the bleachers where I can easily avoid looking at the obnoxious video boards.  The lights, installed in 1988, are not eyesores.  The bleachers have been renovated, which was needed.

The scoreboard, vine covered outfield walls, and sight lines are the same, and I still walk to the ramp my Dad and I used to walk to our seats the first time I set foot in that beautiful ballpark.

From generation to generation, Cubs fans have learned to deal with curses, Bartman, black cats, and eras of absolutely putrid baseball.  Hope springs eternal, and despair visits in the fall.

Their have been thousands of wins and more losses, but the losses that have hurt the most are those who passed away without seeing this Cubs team succeed where so many others have failed.

When last night’s game ended, all those memories flooded back in a torrent of joy.  I was reduced to a pathetic goofball with my wife consoling me and friends concerned for my mental health.

If the Cubs find a way to win the World Series, I’ll cry for the second time in a calendar year for the first time since my Dad took me to my first game.