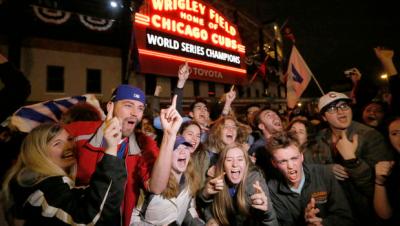 Cubs fans need to celebrating like this until they collapse.  This is a party that doesn’t need to end for days, weeks, or months.

What do we do now?

If the smiles ever fade, Cubs fans are going to have to figure out how to behave without endless references to 1908 and 1945 ringing in our heads.

“Wait ’til next year” is gone – replaced by “This year was was everything I dreamed!”

When Kris Bryant made the throw to Anthony Rizzo to record the final out of the 2016 Major League Baseball season, the longest championship free streak is the history of American sports ended.

As Rizzo tucked the ball into his back pocket (smart guy!), Cubs fans felt a strange sensation of warmth, joy, and nostalgia.  Phone calls, texts, DMs, face times, and snapchats reconnected friends and family who longed to celebrate together the moment they feared would never come.

Many looked skyward as they thought of loved ones who never got to experience this.

All that, Cubs fans have anticipated.  We have rehearsed winning it all in our imaginations thousands of times.  The family hugs, the plans to attend the parade, the homages to departed die-hards, and all the other fooferah that immediately follows a championship.

When spring training rolls around in February and March, and the season opens at Wrigley Field and the first championship banner in 108 years is unfurled – what do we do then?

Do we turn into arrogant and entitled schlubs like Boston fans, who have gorged on the successes of the Red Sox and Patriots for so long, they are now among the most insufferable groups in the annals of man?

Do we remain humble patrons of a long-0suffering, but recently successful franchise that built a massive fanbase through a superstation and an understanding that winning isn’t a prerequisite for enjoying an afternoon at a gloriously green ballpark at the corner of Clark and Addison?

Do we unplug because the deal is done, and what better final chapter could there be as a fan from a family of fans in a city filled with thousands of other families of fans than what happened in Cleveland last night?

The best question is why hurry through any of this to what’s next?

Might be a great idea to avoid examining it.  Live in this glorious moment, and then let the chips fall where they may sounds like a lot more fun than rushing toward jaded, or demanding more of what we already received last night.

I have sworn many times than once would be enough if the Cubs could win a single World Championship, and I will keep my word.  More would be welcome, but unlike so many like my Dad and uncles, we were privileged to be around when last night happened.

That’s enough for me.

Let’s not hurry through this first year after 2016.  The next party might not come until 2124.