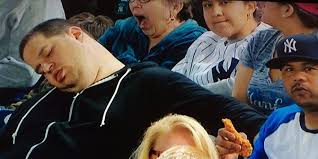 Fans are having a tougher time staying awake at the old ballgame, and baseball’s ideas to fix the problem are more ridiculous than the problems themselves.

Putting MLB rules czar Joe Torre in charge of enhancing baseball fans’ experience watching the game is like putting a plumber in control of the design of a toilet seat.

Only users need to be consulted when changes are made for the benefit of the users.

Baseball is going to tinker at the low-minor league level with starting each half inning of an extra inning game with a runner on second base.

This is a tactic to speed up the game for the fans, or so they say.  It might be better presented as a tactical move to save bullpens already overused by managers who insist upon running through five relievers during a normal nine inning game.

That makes sense, although a manager shooting his wad by going lefty-lefty and righty-righty three times in the seventh inning to get three outs is a bigger problem for pace of play than extra inning games where teams are unable to score in the 10th inning.

Inexplicably planting a guy on second to begin an inning is a ridiculous contrivance designed to save managers from themselves, and fans cheesed off by the pace of play don’t need hysteria in the 10th to feel better about their decision to plunk down $85 for a ticket to watch the interminable pace of play caused by batters adjusting the velcro on the hitting gloves and pitchers circling the mound between each pitch.

The Chicago Cubs played 13 extra inning games last season.  That’s 8% of their games.  Baseball is not fixing pace of play – it’s cloaking a managerial issue in a pace of play vortex.

Baseball is also considering allowing a pitcher to simply wave a batter to first base rather than execute four pitches outside the strike zone to complete an intentional walk.  This is also supposed to increase pace of play.

The problem is that an intentional walk is issued an average of once every 5.2 games, and they take roughly one minute.  Over the course of an entire season, this rule change would save just under 30 minutes (or 12 seconds per game).

Baseball has a pace of play problem.  There is no question about that.  Games crawl along until the sixth inning, when they almost completely stop.

It’s becoming a farce, but not nearly the farce of baseball’s methodology for fixing it.