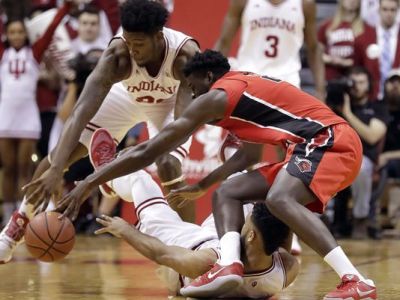 In basketball as in football, when you turn the ball over, you lose. That’s true at Memorial Stadium and Simon-Skjodt Assembly Hall in Bloomington

Other than that, the only worthy discussion about Indiana Basketball is why this disastrous season occurred.

To put this year in perspective, it may be the most disappointing in the program’s history because the expectations just three months ago were so high.  After beating Kansas and North Carolina, “experts” spoke of the Hoosiers in terms of potential of winning a national championship.

Those who watched Indiana closely knew the Hoosiers were deeply flawed.  Their propensity for turning the ball over made them especially vulnerable, but no one saw on the horizon what Indiana was destined to become – a bad (and hard to watch) basketball team.

Injuries have produced a lack of continuity.  They robbed the Hoosiers of an NBA level talent, but players don’t need to be as long and quick as O.G. Anunoby, who went down with a knee injury in the 19th game of the season, to take care of the basketball.

Turnovers have been the chief issue with Indiana’s poor play this season, and nothing coach Tom Crean has done to try to impress upon his players the need to care for the ball has resonated.

Here is how important Hoosier turnovers have been this season:

That is a decisive difference, and tells the story of why this season unspooled in the way it did for a team expected to be near the top of the Big 10.

Not recruiting a suitable replacement for Yogi has caused Indiana many woes this year, but developing a habit of turning the ball over has been the most damaging.

As for Anunoby’s absence affecting IU’s play, turnovers have not been impacted much by his injury.  Prior to Anunoby getting huirt, IU averaged 14.6 TOs/game and 15.1 after.  Anunoby’s unique impact on the Hoosiers was primarily on the defensive end, so that’s not surprising.

When Indiana takes care of the ball, they win.  When they don’t, they lose.  Anunoby’s knee has not hurt nearly as much as Yogi’s 2016 graduation, which was entirely foreseeable from the first time he put on candy stripes in 2012.

The regular season wraps up tomorrow, and Indiana needs a win to avoid a play-in game when the Big 10 Tournament starts Wednesday.  Even with the sloppy play, nobody saw that coming.

2 thoughts on “Indiana Basketball – Trail of tears season has been a tale of turnovers, not injuries”