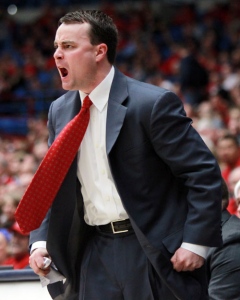 Archie Miller remains a great unknown a coaching because he is a coach – not a brand.

The thing I like best about Archie Miller being named basketball coach at Indiana University is that I know nothing about him.

I had no response to the news a day ago that IU athletic director Fred Glass had tabbed Miller – I mean none.  Not a whoop, smile, frown, or grimace.  The news had no impact upon me whatsoever.

Miller has spent the last six years coaching basketball at the University of Dayton – less than two hours from my house – and I have no opinion about him as a person whatsoever.

I am prone to the quick development of opinions.  I feel something about almost everything, and somehow this coach leading the best program in the Atlantic 10 never made an impact on me one way or another.

We all know the things – the resume’ – that put Miller on the list of candidates Indiana considered.  Dayton has won the A10 the last two years, earned a spot in the NCAA Tournament at the end of each of the last four seasons, and went to the Elite Eight in 2014.

We know that Miller was an undersized and feisty point guard at NC State from 1998-2002.

We know that his brother Sean is the coach a Arizona, and his dad was a coach too.

And anyone who has seen Miller’s wife knows that he can recruit.

Other than that – crickets.

College basketball is filled with self-promoting oafs who present themselves as the smartest men in any room.  Getting big jobs for many is more about branding than quality of coaching.

Tom Crean was such a coach.  He yearned for people to believe he was smart, coveted praise and adulation, and never stopped selling himself long enough for people to feel good about deciding to like him.

Miller’s blank slate belies two traits that will engage Indiana fans who were tired of the relentless salesmanship of Crean.  He is a coach first, second, and last, and he values results over fashion and scheme.

Like the state of Indiana and its university’s fanbase, basketball is what Miller is all about, not posing, posturing, defending, and coveting.

Miller is going to coach, recruit, and build.  If his Hoosiers are anything like his Dayton teams, they will defend with tenacity and toughness, and treasure the ball and open shots on the offensive end.

In three years, we will have a solid idea as to whether Miller was the quiet home run hire many of his peers believe he will be.

Until then… while we await better, get ready for different.

2 thoughts on “Indiana Basketball – Archie Miller is a basketball coach, not a brand”