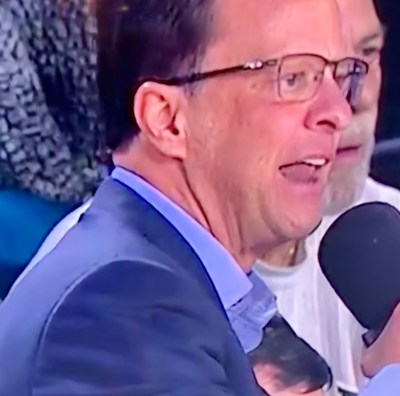 Tom Crean grabs the PA microphone and admonishes Georgia fans for throwing a stuffed animal on the floor.

A Georgia fan threw a small stuffed bulldog toward a Mississippi State player about to shoot a free throw with 1/2 second left in a tie game.  Georgia coach Tom Crean ran to the scorer’s table, grabbed the PA microphone, and admonished the fans.

The referees convened and assessed a technical foul for fan behavior.  The Mississippi State player knocked down a free throw, and they won by a point.

Georgia has had a tough season – winning only one SEC game so far this season.  A win at home against Mississippi State would have been nice for Crean, the Bulldogs, and fans in Athens.

That the refs decided to call a technical without a warning was strange.  It’s also odd that there is no proof the stuffed animal came from a Georgia fan.  It’s likely, as the game was played at Georgia, but there are a number of clever visiting college fans who might try to manipulate the outcome of a game by tossing something onto the floor in the hopes of generating a T for their hosts.  (Of course, none would come from Indiana University, whose best effort to disrupt Purdue Tuesday night was to yell “***k you, Haarms!” – which revealed IU students as a group collectively incapable of anything clever.)

The point is not to berate IU, claim injustice for Georgia, or decry the lack of rationality by fans who throw stuff (even harmless items like small stuffed animals) on a court or field.

I was no fan of Crean as a basketball coach at Indiana, and he was no fan of mine as someone who held him accountable for his leadership of Indiana’s basketball program.  As outspoken as I was about Crean’s mismanagement, last night’s loss gave me no joy.

Georgia got screwed last night.  A game that very likely was headed for overtime ended because of the technical foul called on Georgia because of the idiotic but benign behavior of a fan.

Losing eats at coaches, and last night’s loss was as brutal for Crean as any loss for any coach this season.

Georgia showed a level of fight Crean should be proud of in coming back against Mississippi State after being behind by as many as 17 points in the second half.  That’s a hell of a thing – leading a team that had lost 11-of-12 SEC games going into last night’s debacle to battle like hell for 40 minutes.

My disdain for Crean as Indiana’s coach was never personal.  He was not the right fit as coach at IU for a variety of reasons, but that’s no reason to celebrate his unearned misery last night.  I hope he gets Georgia turned around.

Last night’s game should have given Crean a night to breathe easy and enjoy the fruits of his team’s labor and continued willingness to work hard and believe in each other.

Georgia’s loss was a shame because the referees overtly affected the result of a game that deserved to be determined by the players.

Crean and his Bulldogs deserved better, no matter where he worked prior to Georgia.