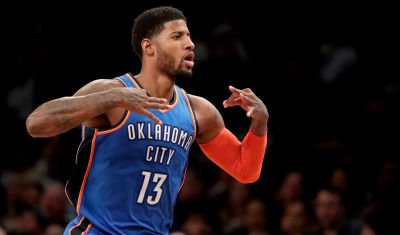 Paul George’s self-immersion as an NBA celebrity has caused his bank account to swell and his teams to suffer.

Paul George is not as valuable a player as PG-13 is as a brand, and that’s just the way George likes it.

The OKC Thunder forward had a typical line last night – 27 points and seven boards in a 114-94 loss to the Portland Trailblazers.  The Thunder now trail Portland 0-2 in their first round playoff series.

This is familiar territory for George, who decided a few years ago to change his number from 24 to 13 to create his PG-13 brand.

The last time George was on a team that won a playoff series coincides with the last time he wore the number 24.  I’m not arguing that George wearing 13 is a different player than he is when he wore 24, but when George decided he needed to become a brand, it was evidence of a shift in priorities that resulted in his teams becoming mediocre.

Before George fell in love with being PG-13 as though it was some kind of super hero, George was a tremendous force for good for the Pacers franchise.  He insisted on sharing the spotlight with his teammates as they made it to back-to-back Eastern Conference Finals in 2013 & 2014.

Then the switch flipped.  George embraced branding, and his teams receded into competitive irrelevance.  He also suffered a gruesome lower leg injury that might have caused him to reevaluate his place in the game – and his ability to make more cash as PG-13 than Paul George from Palmdale, California.

George was asked recently about the possibility of his number being retired by the Pacers.  He answered, “I’m not sure if I’ve done enough to have a jersey hung here. But that’s not in my hands. I’m stacked up against a lot of greats…  I would love to (have the jersey retired), because I can’t say I would’ve made it to where I’m at if it wasn’t for this opportunity here and the chance I got to be Paul George here. So we’ll see.”

That’s typical Paul George false humility with a self-important third person reference to himself for emphasis.

Not only is George stacked up against greats, he ranks 11th in franchise history in win shares – a metric that measures value to a team.  Jeff Foster, Vern Fleming, Rik Smits, Jermaine O’Neal, Danny Granger, and Dale Davis rank ahead of George in win shares.  Had he stayed in Indy, he would likely have finished his career behind only Reggie Miller – but he didn’t.

That George is in OKC is ultimately a good thing for the Pacers, as Kevin Pritchard was able to deal him for Victor Oladipo and Domas Sabonis, so no hard feelings, but no retired number either.

No one wishes for George to fail again and again in the playoffs, but the facts paint a picture of a player who competes economically at a higher level than he does on the basketball court.

The Thunder are a mediocre team with no cap space for two more seasons, so they have limited options to appreciably improve over who and what they are as they struggle against Portland.

Welcome to PG-13’s world – one of mediocre results for his team and fat bank accounts.