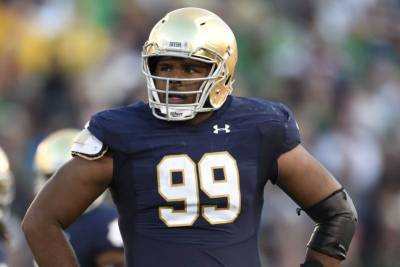 The Colts won’t take Jerry Tillery because I love him. They never take the guy I love.

What will the Colts do tomorrow night with their 26th pick in the NFL Draft?

Colts GM Chris Ballard is the guy who will pull the trigger, and he has no idea what will happen.  So how can we even begin to venture a guess?

There are a few things we do know about Ballard and the Colts:

I always fall in love with somebody the Colts don’t take, so if you want to bet on who Ballard won’t select, Notre Dame DT Jerry Tillery is my guy.  He’s a physical monster who succeeded without great hand technique.  He was productive throughout his career in South Bend, and he is physically similar to Margus Hunt.

The positions that are completely out of the question for the Colts at #26 are quarterback, kicker, and punter.  Everything else is in play.  It’s unlikely Ballard grabs a running back or tight end, and my money would be on the Colts waiting to take a linebacker that early, but anything is possible

Will the Colts trade up or back?  Ballard said there is a group of eight players he has identified as possibilities for #26.  If all eight are gone (or still there), the Colts may trade back.  Trading up seems against Ballard’s DNA.

The NFL Draft is a good time because we get to see smart people screw up, and when they do, we feel very smart.

This is the back nine at Augusta for GMs.  Some are capable of the preparation necessary to overcome the nerves that come with a three day run of selections that could establish GMs as the next genius – like Bill Polian or the next, well, not genius, like Ryan Grigson.

Two drafts in, Ballard looks like a guy who knows how to handle himself when chaos reigns, and so he’s put together one great draft and another that still gets in incomplete grade because of Malik Hooker’s health.

All in, it was a lot more fun to try to outguess Grigson than Ballard because it was likely we would be right with Grigson.  Ballard is sharp, get’s talent & culture, and knows about fit.  Outguessing Ballard is going to be tough.

My bold Colts draft prediction is this –  whatever Ballard decides late tomorrow night, he will be proven correct regardless of the initial critiques.