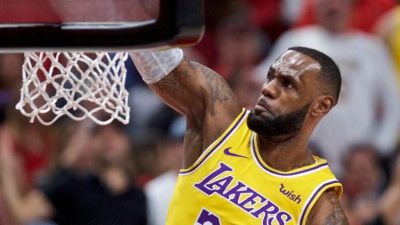 The decision to deal for LeBron James is easy – he’s good for cash flow and bad for basketball.

Rumors are swirling that the Lakers are looking to deal LeBron James only one year after he signed a four-year deal as the foundational rebuilding piece for the formerly proud franchise.

One of the teams being discussed as a destination for James is the Indiana Pacers because the Pacers have $45 million in cap space.  That rare cap friendly number will compel media trolls to advance the Pacers as a potential trade partner throughout the NBA’s silly season.

Here are four reasons the Pacers will not be among the suitors for James:

4 – James repels free agents and coaches.  More players and coaches would choose not to play with or coach James than he would attract.  When James presence meant an automatic punched ticket to the NBA Finals, putting up with his self-indulgent circus was worth it.  The Lakers have been turned down by an ever growing list of coaches they courted.  They are interviewing former Pacers coach Frank Vogel – that’s how non-coveted this gig is.  I love Frank, but he’s not exactly seen as a successor to Gregg Popovich as the best coach in the league.

3 – The Lakers won 38 games with James.  Not only does James’ presence not guarantee a trip to the NBA Finals anymore, it doesn’t even guarantee a winning season.

2 – The tariff will be immense.  The Lakers are not simply going to give away James.  A deal with the Pacers would likely have to include several current players and multiple first round picks to get the fading superstar.  The Pacers currently have Victor Oladipo, Domas Sabonis, Myles Turner, Aaron Holiday, TJ Leaf, Edmund Sumner, Doug McDermott, and Davon Reed under contract.  Go ahead and try to put together a deal for James the Lakers could stomach without gutting what currently exists on the roster.

1 – James will be 35-years-old in December.   James has entered the declining years of his career.  With the Lakers in 2018-2019, James played fewer games and scored fewer points than during any season in his career.  He may have a great year left, but he’s in the 4th quarter of his great career.

Here are four reasons the Pacers should trade for James:

4 – Media exposure.  ESPN and other national networks talk about the Pacers just about as often as they do the Phoenix Suns, Denver Nuggets, and Orlando Magic – which is to say never.  With James, the Pacers would have their own ESPN correspondent.  James would bring a temporarily bright spotlight to the franchise.

3 – Tickets.  As much as Indy loves Vic, they would play a hell of a lot more to watch one of the best players in history – even in his twilight. Sellouts would be routine at Bankers Life Fieldhouse.

2 – Merch!  All of a sudden, those dopes running around in James Cavs, Heat, and Lakers jerseys would dig into their wallets to buy Pacers swag.  James has sold tens of thousands of Lakers jerseys, and while Pacers gear does not have the international cache of the Lakers, James would make it cool immediately.

1 – Great way to hit rock bottom in two years.  If the Pacers dealt for James, they would likely deal him after two years of residence in Indiana.  With the assets needed to acquire him gone, and James gone as well, the Pacers would crater.  They could have several opportunities to draft in the upper levels of the lottery – plus a virtually bottomless pit of cap space.  If the Pacers want to sink fast, this gets it done while simultaneously building brand value.

There is no chance the Pacers make any deal for James because under Simon Family ownership have always operated with an eye toward being the best team they can be each season.  Trading for James is for franchises interested in a cash grab.

The Pacers are way too responsible to wade into the murky waters where James can be caught.

One thought on “LeBron James coming to Pacers? Here are four reasons it shouldn’t happen – four more it should”