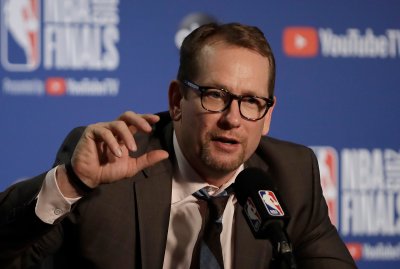 Nick Nurse is a good coach who made a bad call.

Toronto Raptors coach Nick Nurse has done a wonderful job leading his Toronto Raptors to the brink of their first NBA Championship, but he broke the first rule of coaching last night.

The first rule of coaching is a very simple axiom that mirrors the Hippocratic Oath that physicians take – “First do no harm.”  In coaching, it’s “When your team is about to win, sit back and watch.”

There are other coaching rules the timeouts violated – “When an opponent is down, don’t let him up,” “Don’t take your foot off the throat of your enemy,” “When things are going your way, keep going,” and of course, “Don’t complicate winning.”

Those really aren’t separate rules – they are the same rule phrased differently.  Here’s how Nurse screwed up:

With 3:05 remaining in Game Five of the NBA Finals, Nurse decided to get clever and call back-to-back timeouts.  At the time, the Raptors were in the midst of a 12-2 run that gave them a six-point lead.  Kawhi Leonard had scored the last 10 points, and Steph Curry had just missed a three-pointer.

Momentum was solidly on the side of the Raptors when Nurse called the timeouts, and it evaporated while the Raptors sat.  The Warriors scored the next nine points on three straight triples from the Splash Brothers, and the game ended 106-105 in favor of the Warriors.

Instead of continuing an NBA Championship celebration this morning, the Raptors are getting on a plane to the Bay Area for Game Six.

Nurse explained his decision after the game, “We just came across and just decided to give those guys a rest…  Just thought we could use the extra energy push.”  And then they just lost.

Sadly, Nurse didn’t recognize that a little rest was exactly what the Warriors needed to elevate their game.

See, when a coach calls timeout to rest his players, the opponents are able to rest too.  They are not required to continue running as the team that exercised the timeout cops a squat.  Not only does a coach need to recognize when his players are tired, he has to assess the fatigue level of his opponent too.  That’s where Nurse failed.

It’s really hard for a coach to be disciplined enough to avoid inserting himself into the game.  Helping is what a coach is supposed to do, but sometimes sitting and watching is the most helpful move a coach can make.

There is no guarantee that the Raptors would have won had Nurse not called timeouts, but we are 100% certain they lost after he did.  The Raptors spit the bit last night, and those timeouts were clearly one of the pivot points that gave the Warriors life.

Down 3-1 with Kevin Durant staring at his torn Achilles tendon, it was the Warriors that needed a break.  Nick Nurse gave it to them.