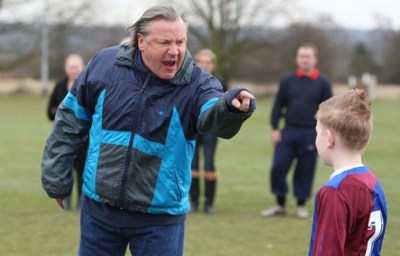 When I was a kid playing any sport with a ball and scoreboard, parents used games and practices as a babysitter.  They napped, partied, played golf, relaxed, or whatever the hell else they felt like doing when kids weren’t bouncing off the walls in their homes and neighborhoods.

At my high school soccer games, most parents were AWOL.  One of those that came read a book in the stands rather than watch his son compete.  My dad was the only parent I ever saw at any of my high school golf matches.  He supported and mocked me with equal enthusiasm.

Now we have parents who attend every game, question every call, and demand coaches see their children as precious presents – like they do.  It’s ridiculous.

Before I rant further, allow me to admit to my own failings.  Of the thousands of basketball games my son played from age six through high school, I missed a total of two.  I was either a head or assistant coach for every baseball team he played on, and never missed a game.  When Ryan played high school basketball as a freshman, I would sneak into the loft above Cathedral’s gym and watch practice.

I tried to maintain some level of dignity and reason during Ryan’s games by either videotaping them or keeping a scorebook.  Both activities were simple diversions so I wouldn’t yell at refs or harangue opponents.

Once in Lubbock, Texas, during a semifinal game against the Arkansas Hawks at the BCI Nationals, another dad and I started a countdown to halftime four seconds ahead of the game clock to rush a Hawks guard into a difficult half court shot.  He missed, and our guys got a possession out of it that ended with a good shot.

Even our own parents were appalled, including my wife who said, “That’s not funny.  It’s pathetic.”  She was right.

No, I never got in a fistfight when my son was seven, like those idiots in Colorado, but I have been to the dark side.  That’s why you should listen to me when I implore you to back up – way back – as you immerse yourself in what used to be a diversionary exploit for children.

The best of what your child will take away from participating in sports, assuming he or she is never paid to play, is friendship, experience dealing with adversity, and exercise.  There might be a little travel, but it’s generally to off the grid towns like Lubbock, Fort Wayne, and Fayetteville.

The worst is a self-loathing driven by parents, lack of respect for authority, and a sense that sports are more important than grades.  Coaches will demand routine excellence from children, and for some the joy of playing the game will erode into bitterness.  Kids will feel inadequate as they fail to measure up to irrational standards set by parents who want their child to be the grand exception who will make millions just like the athletes they see on TV.

My advice is to relax, take a deep breath, and understand that youth sports is not about home runs, three-pointers, touchdowns, hat tricks, or pancake blocks.  They aren’t about missed PKs, free throws, walks, or incompletions.  And they sure as hell aren’t for wins and losses.

Youth sports is about the young adult your child will grow into.  It’s about laughter, challenges, and hard work when no one is watching.

It’s not for you.  It’s for your son or daughter.

Instead of exhorting your kid toward a greatness he or she has scant chance to attain, how about making sure they have fun?  If you can’t do that, use sports as a babysitter while you stay away and do no harm.