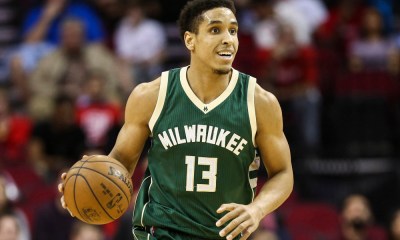 Malcolm Brogdon is a hell of a get for the Pacers who continue to value culture.

The Indiana Pacers clearly subscribe to the notion that in basketball the whole needs to outweigh the sum of the parts.

In a star driven NBA, teams overpay for celebrity.  In Indiana, where celebrity is a meaningless measuring stick for people and players, the Pacers target players concerned with winning rather than Instagram followers.

So yesterday, when team were ready to hand max money to stars like Kyrie Irving, Kevin Durant, DeAngelo Russell, Kawhi Leonard, and others, the Pacers went after a guy whose nicknames include “The President”, “Humble Moses”, and “Uncle Malcolm”, and who has 1,030 Instagram followers.

Malcolm Brogdon was targeted early in the process by the Pacers, who covet his combination of leadership and youth every bit as much as his analytics.

Brogdon can play smart basketball.  Exhibit A is his membership in the very exclusive 50-40-90 club – NBA players who have hit 50% of their field goal attempts, 40% of three-point attempts, and 90% of their free throws (Reggie Miller, Larry Bird, Steve Nash, Durant, Dirk Nowitzki, Steph Curry, and Mark Price are the other seven members).

The Pacers also signed Jeremy Lamb, who is a lesser known player because he has spent his entire seven-year NBA career in Oklahoma City and Charlotte.

Maybe as important for the Pacers is Ricky Rubio choosing to sign with the Phoenix Suns.  Rubio  will earn $17-million during each of the next three years for running the offense and shooting threes like he needs a map to find the rim.  Rubio had been rumored to be a focus for the Pacers.  Sometimes a team’s best deals are those they don’t make.

Is that core going to be good enough to contend for the top spot in the Eastern Conference?  Everything has to break just right, and one of the young guys needs to develop into an elite player, but it’s a hell of a lot more likely today that it was yesterday.