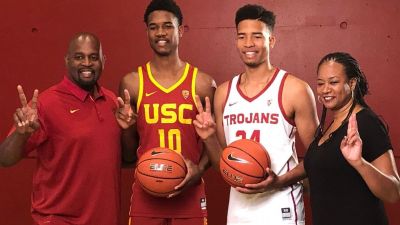 The Mobleys are laughing all the way to the bank – and it’s 100% NCAA sanctioned!

Corruption in college basketball is alive, well, and legal.

USC Basketball got great news it expected yesterday when Evan Mosley, the top ranked recruit in the 2020 high school class, committed to the Trojans.  They got similarly good news last year when Evan’s brother Isaiah committed.  He’s another five-star recruit.

Eric Mobley, Evan and Isaiah’s dad, was hired by USC coach Andy Enfield as an assistant coach 17 months ago.  Mobley was a coach for the Compton Magic, a summer basketball program in southern California, and his pipeline produced another great get for Enfield – five-star Onyeka Okongwu, a 6’9″ power forward.

In no way is it against NCAA rules for a coach to be hired by as an assistant coach of a basketball program because he’s the dad or coach of talented children, but corruption is not always against the rules.

Hiring a dad isn’t illegal, but it’s a close moral equivalent to a basketball program handing the father of a recruit cash to secure a commitment.  Dad gets paid, kid commits.  Again, not illegal, but the quid pro quo is at least as clear.

Instead of a coach giving a dad an envelope with $2,500 in it, the school writes him a series of paychecks that total hundreds of thousands of dollars each year.  That makes Brian Bowen Sr. look like a piker by comparison for leveraging his son’s talent to Louisville.

Bowen lost his collegiate eligibility as a result of his dad’s greed.  The Mobleys are going to laugh all the way to the back as Isaiah and Evan play for the Trojans, and Eric coaches until his kids run out of eligibility or jump to the NBA (both Mobleys are projected to be taken in the 2021 NBA Draft).

Enfield will likely find another summer coach with talented progenies to secure top talent, and the cycle will continue.  That’s life in college basketball for coaches willing to do what’s wrong while embracing what’s legal.

In Enfield’s world, the Mobley’s justify the means.