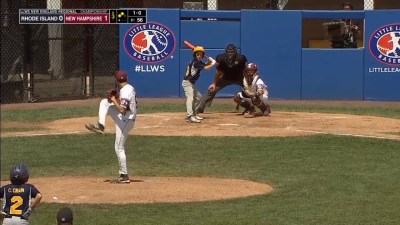 Stealing signs is as American as baseball. In fact, it IS baseball.

It seems Rhode Island runners at second base may have been stealing signs from the catcher and flashing them to the batter.  Can you imagine!

Sign stealing has been a part of baseball since signs were invented.  It’s how baseball is played.  Signs are designed to hide strategies – like pitches, bunting, hit and runs, steals, and all kinds of other stuff.

At some point, the big brain adults at Little League Baseball decided sign stealing should be made illegal.  Why?  Great question.  Maybe coming up with a set of signs that was tough to steal was too difficult for coaches.  Maybe players enjoyed stealing signs as much as I did when I was a kid.

There was nothing better when I was 10 than figuring out an opponent’s signs.  It felt like we had cracked a safe containing the secrets of the world.  The key was then to respond in a way that didn’t let the other team know we had them.

Baseball is not just a game of hitting, catching, and throwing a ball.  It’s much deeper than that.  Baseball is about planning, strategy, subterfuge, and secrecy.  That’s what makes it fun.  That’s why kids and adults love it.

For a 12-year old to stand at second, see a catcher’s sign, and communicate it to the hitter without tipping that he knows the signs is the most purely baseball activity a kid can enjoy on a baseball field.

At the Major League level, the guys in the dugout are constantly trying to figure out signs as they are relayed from the manager to third base coach to runners and the hitter.  Runners on second stare into the catcher’s nether regions each pitch to see if he can figure out which sequence of hand movements mean fastball, cutter, curve, slider, and the location of the pitch.

Stealing signals is a purely American act that goes back to the “Ride of Paul Revere”, and the signs used to communicate whether the British were coming by land of by sea.  If the British has cracked our one if by land and two if by sea, who knows how the Revolutionary War would have ended?

If Rhode Island cracked New Hampshire’s signs, that’s on New Hampshire, and they should own it rather than appealing to some panel.  Seems that one team taught kids how to win, and the other is teaching its players how to whine.

Shame on Little League Baseball for outlawing sign stealing, and shame on New Hampshire for valuing rules over gamesmanship.