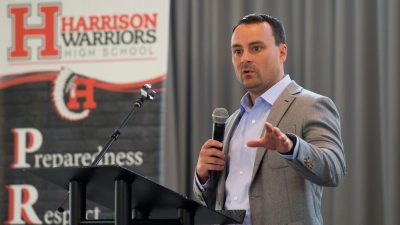 Archie Miller gave IU fans from Evansville exactly what they wanted last night. Can his team do it this November thru March?

Archie Miller doesn’t do a lot of press.  Some coaches are very receptive to the idea of chatting with media people about life and basketball.  Archie is not among them, and that’s just fine.

I have no problem with coaches – whose time is at a premium because of workouts, meetings, compliance, recruiting, and other responsibilities – deciding that media is the kind of time management termite they can live without.

It makes Archie’s media availabilities all the more valuable, and when he took some media questions during a trip to Evansville for a speaking engagement, we listened.

He said a few things he said that were of note:

In late August, we tend to get nothing but good news, so none of Archie’s comments were surprising, but it’s good that he continues to talk to fans across the state and recruit the hell out of Indiana because if you’re going to beat Kentucky – and everyone else – it’s a hell of a lot more fun and likely with native Hoosiers.