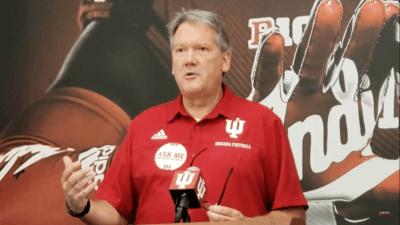 I believe in Fred Glass as an AD, but it’s too early to extend Tom Allen’s contract.

I’m not sold on Tom Allen as Indiana’s longterm solution as a football coach.  He could be the guy, or he could be the latest in a string of mediocres to lead IU Football that began with Cam Cameron.

So when I heard athletic director Fred Glass identify the next big investment in Indiana Football as being a contract extension for Allen, I had to listen again just to make sure I didn’t hallucinate.  Glass said he has some money in his “cookie jar” for the raise that will accompany that potential extension.

What has Allen done so far to earn an extension?

Allen has been IU’s coach for two seasons.  Both ended with 5-7 records and losses to Purdue in the Old Oaken Bucket Game.  They have yet to earn a bowl invite, and have not won more than two Big 10 games in either season.  That shouldn’t get Allen fired, but it can’t be defined as an achievement worthy of an extension either.

Recruiting has improved, according to experts.  Allen is attracting a better grade of athlete to Bloomington.  He knows Indiana and more importantly he is well-connected in Florida, where college football players rival oranges as the state’s top export.  That might lead to more wins, but it hasn’t yet.

Rewarding success is good business.  Extending a successful coach is the way to keep a uniquely talented guy tethered to his program rather than being poached by another.  Allen has neither been successful, nor in demand as a replacement at a bigger and better program.

Watching Indiana remain mediocre as the program has been led by Cameron, Gerry DiNardo, Terry Hoeppner, Bill Lynch, Kevin Wilson, and now Allen has frustrated fans, players, boosters, and anyone else affiliated with the Hoosiers.  Sticking with a coach is something IU hasn’t tried since Bill Mallory, but IU needs to stick with the RIGHT coach.

Is it Allen?  Anyone who says he knows has a better crystal ball than I do.

I’m sure Fred knows things about the program I do not.  Maybe those things show IU in ascension as a competitor in the Big 10 East – a division with Ohio State, Michigan State, Penn State, and Michigan.  It’s possible.  Maybe Indiana is on the precipice of an era of good football.  Maybe IU is ready to beat Purdue and go to a bowl.  Maybe is not a word that should prompt a big raise.

What’s wrong with a little patience?

The promise of success is not success just as the promise of wealth doesn’t equate to wealth.  A contract extension with a big raise should be delivered to Allen when IU shows improvement.  Not a minute before.

If the Hoosiers punch their ticket to a bowl in Allen’s third year, go ahead and reward Allen with an extension.  If IU falls shorts again, the message of an extension would be that 5-7 is good enough for Indiana.

That’s a dangerous message for an athletic director to send.

One thought on “Extension time for Indiana Football coach Tom Allen may come, but it is not here yet”