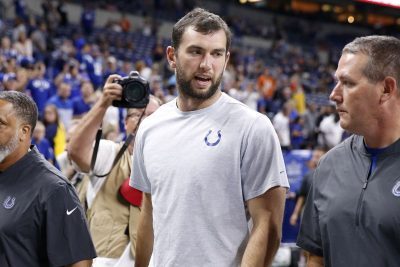 Fans were hurt, Luck was hurt. Both will get over it.

Fans are told constantly by players, coaches, and franchise owners they are an incredibly important part of the team.  In football, they are referred to the 12th man.  Colts fans even have a place in the team’s Ring of Honor.  That’s how essential they are to the operation of the team.

So you’ll have to excuse them for taking the retirement of Andrew Luck a little bit too seriously.  Forgive a few of them for booing Luck last Saturday night as he left the field after they found out from Adam Schefter’s Twitter feed that he was done with football.

The booing and judgment of Luck was motivated by the financially prudent messaging that makes fans feel as though they are an integral part of the team – as though they belong.  As the Colts (and every other NFL team) insist, Luck wasn’t “a quarterback”; he was “our quarterback”.

And “our quarterback” didn’t think enough of fans to share the news of his retirement directly.  It was told to them by that twit Schefter, so there was booing.  Luck really never shared much with fans.  He was most comfortable on the field as the quarterback.  In the community, he appreciated his privacy.  He wasn’t the life of the party, but that was okay.  Indianapolis had his back, as they always do for athletes.

Some Colts fans felt Luck’s lack of respect for them was revealed at the moment Schefter’s tweet was posted.  Fans felt like they had been taken for a ride by Luck and by the franchise.  As long as they write checks for tickets and swag, they are part of the family.  When times get tough – they’re interlopers, crazy cousins, unwanted pets.

In reality, Luck owed fans nothing – not the truth, not effort, not wins.  He owed blood, sweat, a kidney, and loyalty to his teammates and employer.  Luck owes love to family, as it should be.

Sadly, no one ever tells the fans those things.

This emotional detachment between athletes and fans works the other way too.  Fans enjoy quarterbacks when they win, and quarterbacks enjoy the fans right back until they are done with him – as many Colts fans are now done with Luck.

Scott Tolzien is a hell of a guy, just ask anyone at Fremd High School in suburban Chicago or the University of Wisconsin where he starred at quarterback.  When Tolzien threw two pick sixes on opening day in 2017 against the Rams in Los Angeles, fans had enough of the plucky third stringer.

Not sure how many fans would have recognized Tolzien before or after that miserable afternoon, but few would have rushed him for an autograph after.

How many Colts fans would enjoy meeting Hank Baskett?  How about none, unless we count those who would like to scream at him for muffing that onside kick at Super Bowl XLIV.  Then it might be thousands.

Teams treat fans with enough respect to get them to renew their season tickets, and fans love the players and coaches as long as they win.  Some teams forget how flaky fans can be, and fans forget that sports teams are businesses.

But both were reminded Saturday night.