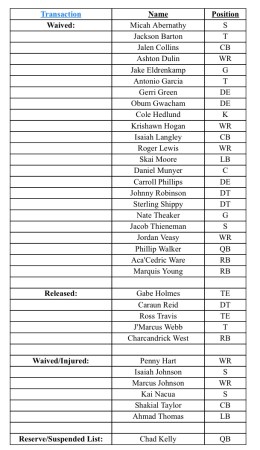 This doesn’t happen very often.  The Indianapolis Colts cut exactly the players I assumed would go.  My being correct is not much of a consolation for those who were lanced from the roster.

In the battles at tight end and running back, Hale Hentges and Jordan Wilkins stayed with the team.  Ross Travis and Aca’Cedrick Ware were told to turn in their playbooks.

Defensive ends Carroll Phillips and Gerri Green were cast aside.  Bad news for them, but good news for Jabaal Sheard as he was not assigned to IR.

Cornerback Jalen Collins is a goner, but special teams monster Chris Milton stays.  Phillip Walker is temporarily a former Colts as he (and nine others) will be assigned to the practice squad unless they are claimed by another team.

There was a lot of bad news delivered today at the Colts Complex, and just as much good news.  For every painful cut, there was an equal amount of joy for those who will awaken as Colts tomorrow.

The truly sad part of this process comes over the next 48 hours as the Colts will evaluate the cast-offs from the other 31 NFL teams.  They will undoubtedly sign a quarterback, and might go after an offensive lineman or two as well as a running back.  Anywhere GM Chris Ballard can find an upgrade, he will file a claim.

As players are claimed off waivers, an equal number will be sacrificed.  Some will come so close to living their dream they can taste it, and others who want to play a young man’s game one more season will be told adulthood is calling.

For 37 Colts, the end came today.  For a few more, it will come early next week.  For the 53 men who stick on the roster, big fat game checks will be issued throughout the season

The NFL is cruel, and today it’s at its most cut throat.

One thought on “No surprises among today’s Colts cuts, but that doesn’t make it easier”