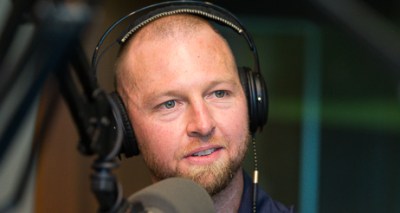 Chris Duncan died today.  He was a St. Louis Cardinal, a radio host, a son, a husband, and a great guy.

He was diagnosed seven years ago with the same brain cancer that claimed his mom.  Not many fight it as long or as well as Dunc did.

At the time Dunc learned of the cancer, I was the program director at 101ESPN – the station where he was a co-host of The Fast Lane with Randy Karraker and D’Marco Farr.  He called to let me know that he would miss work for awhile as he sought counsel and treatment at Duke University.  There are good and bad days to be a program director.  That day was the worst.

Dunc would undergo surgery to remove as much of the tumor as was possible.  It affected his speech for a time, but he returned quickly and re-established himself as one of the most honest and glib sports analysts in the business.

When I first heard Dunc on 101, it was clear he needed to be on more often.  The coolest part of being a program director is hearing a performer who compels you to stay in the car and listen after you get to where you’re going.  That’s the test – if you can’t get out of the car before a show goes to commercial, you’ve really got something.

Dunc had that something.  He always kept me in the car because he was funny, informed, blunt, and could say something dangerous at any moment.  At that point, Dunc was one of three former Cardinals who rotated as part of The Fast Lane, but he was the standout.

There are a lot of former athletes in media.  Some are smart and funny, but they don’t do the work necessary to be well-informed about the sports they did not play.  Others do the work, but their personalities don’t pop.  Dunc worked like a fiend AND was spontaneously compelling.

He was impossible not to like – on the radio, in the office, or over a beer.

Dunc’s baseball stories were hilarious.  He was a brawler on the field and in the studio.  He never pulled a punch as he played, hosted, or fought that damn cancer.

He told one story about pitching in high school in front of a bunch of scouts.  He was built like a tight end and threw hard.  And it didn’t hurt that he was the son of Dave Duncan, the best pitching coach in baseball history.  With two dozen scouts pointing Juggs guns at him to clock his velocity, a batter stood in, timed one of Dunc’s fastballs, and drove it over the wall.  That’s baseball to Dunc.  What wasn’t baseball was that the guy totally pimped it out.  He watched the entire flight of the dinger as he slow-walked toward first.

Not being a patient guy, Dunc didn’t wait until the hitter’s next plate appearance to communicate his anger.  As the next man up stood in the batter’s box, Dunc reared and threw a fastball at the previous hitter as he stood in the dugout.  By the time the chaos calmed, the area where the scouts were huddled to watch was empty and Dunc fell off draft boards – at least as a pitcher.

Now throwing at a guy in the dugout is a dangerous thing to do, and something I’ve never heard of anyone else doing in a baseball game.  Most people telling a story like that would sound crazy, but Dunc’s energy breathed humor into it, even though he never told it to be funny.  He always seemed a little ashamed of it, and that just made him more endearing.

There is also the story of how he celebrated the Cardinals 2006 World Championship with the Commissioner’s Trophy, but I can’t tell that story because I don’t know how to describe it in a family-friendly website.  What Tony LaRussa tells people is that the Cards would never have won that championship without Dunc’s contributions (22 bombs in 280 at bats, and his WAR was 3rd among Cardinals hitters despite playing only 90 games).

When I met him, I told him all I remembered from his playing days was the way he mistreated the Cubs during a series at Wrigley in 2006 when he homered in three straight games.  As always, he brushed off the recollection of his accomplishments and said, “Those fans in the bleachers gave me hell all the time.  They never stopped.  I didn’t know what the hell I was doing in left field, and somehow they knew.  That was weird.”

Chris Duncan’s passing makes the world a less fun and bold place.  My recollection is that at the time of his diagnosis, the doctors gave him a 50/50 chance to live two years, and a 5% chance to make it four years.  He stretched it to seven with the love of his wife Amy, brother Shelly, and his dad Dave.

Dunc jammed a lot of fun, learning, madness, and love into 38 years.  Everyone who knew him will tell a story about him tonight, and the tears will turn to laughter – just like he would want it.