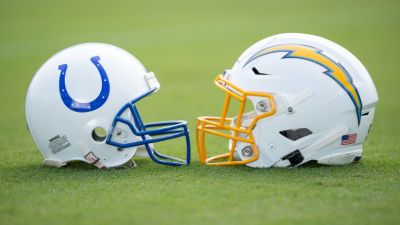 The Colts won the turnover battle, Marlon Mack ran for a career high 174 yards, and Jacoby Brissett threw two TD passes and no picks.  But they lost to the Chargers 30-24 in overtime anyway.

There are reasons – three big ones – why the Colts didn’t win their season opener this afternoon..

Adam Vinatieri missed two field goals and an extra point for the first time in his hall of fame career, but the GOAT wasn’t the only goat for the Colts.

Two of the three Colts penalties led directly to Chargers touchdowns.  One was against Denico Autry for bowling over a defenseless long snapper on a field goal attempt.  The result of the penalty was a first down, and the Chargers scored two plays later.  The other was on Justin Houston for offsides on a third and eight play from the Chargers 27 with 9:51 left in the first half.  Houston’s jump nullified a Kemoko Turay sack, and gave the Philip Rivers another bite at the apple rather than punting to the Colts.  Two plays later, Rivers hit Austin Ekeler for a 55-yard touchdown pass.

I’m not great at math, but Vinny’s misses account for seven lost points.  Autry’s personal foul was the difference between a three-point field goal and a TD, so there are another four points. Houston’s offsides was worth seven.  That’s 7+4+7 for a total of 18 points in a game that was tied at the end of regulation.

That’s football.  It’s a game that makes teams pay for their mistakes.

In a season with only 16 games, each can have a massive importance toward making or missing the playoffs.  The Colts could have won in LA.  They should have won in LA.  But they did not win in LA.  The scoreboard gives a black and white result – a win or loss.  There is no gray area in the NFL.  There are no consolation ribbons for effort.

So the Colts are 0-1 with a tough matchup in Nashville next Sunday against the 1-0 Titans.  A loss there, and all of a sudden the Colts will be two games back in the AFC South, but let’s talk about some of the gray area victories that should give fans a window of hope for the rest of the season:

Obviously, today’s loss wasn’t the result the Colts hoped for today, but they proved to themselves that without Andrew Luck, they can go on the road and compete successfully against a team that finished with a 12-4 record in 2018.

It can be argued that the Colts deserved better today.  I won’t, because like William Munny says in the Clint Eastwood movie Unforgiven, “Deserve’s got nothing to do with it.”