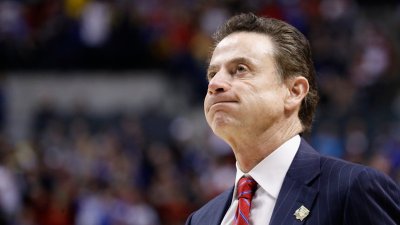 Former Louisville coach Rick Pitino will now get to pretend he resigned.

I love justice.  The moments when justice happens seem few and far between, but that only makes them more enjoyable.

When former basketball coach Rick Pitino sued the University of Louisville for more than $35-million in a wrongful termination lawsuit, I feared U of L might be forced to pay something to their ex-coach whose program obliterated the line that separates appropriate from the idiotic. Settling a suit can be the right road for risk-averse defendants.

Remember how he crossed the line?

Pitino’s staff made cash payments to the father of a recruit, and hired strippers and prostitutes for team parties.  Worse, those parties included high school recruits and their male family members.

This was a rogue operation that required a moral cleansing at a molecular level, so Pitino was fired and his athletic director had to go too.

Louisville showed backbone as it countersued Pitino.  They weren’t going to backpedal and stroke a check to make Pitino go away.  I loved it.

Yesterday, I was thrilled when the announcement came there was a settlement between Pitino and the school because Pitino walked away with only a change in the cause of his removal.  Pitino’s record with the Cardinals now cites resignation instead of terminated as the reason for his leaving.

Fine.  He quit, according to the file.  Anyone not suffering from dementia knows exactly what happened.  Pitino lost control of his program, was outed by Katina Powell – the ringleader of the strippers – and an Adidas shoe rep.  He was told “pack a box.”

The only news that would make this resolution more fun would be if he had to go into his pocket six-figures deep to pay his attorneys.

Pitino is the embodiment of all that’s wrong with college basketball.  His program cheated like hell because he had no fear of the NCAA – the organization tasked with preserving the appearance of fair play.  Pitino was about money and wins.  That narrow and self-indulgent focus brought championships and amorality to the University of Louisville.

In the end, it was a tell-all book by Powell and a federal investigation of shoe company influence in college basketball recruiting that brought him down.  Pitino’s lack of fear of the NCAA was smart business, but he overlooked the fact that doing wrong can have a consequence, even when an oversight organization is toothless.

Pitino is an ends-justify-the-means culprit who has been driven from college basketball at the tail end of a very lucrative career.  I’m sure he feels picked upon as one of many who scoff at recruiting rules.  He has his boat, mansion, and wealth.  But his good name is gone forever, as it should be.

Almost two years after being fired, Pitino settled for the right to pretend he resigned.  Good for him.  Great for college basketball.