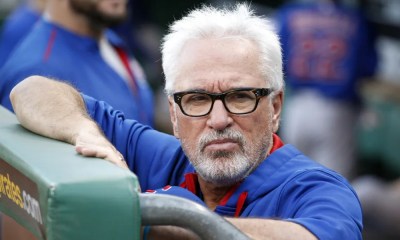 Barring a miracle, Joe Maddon will manage the Cubs for another six games.

The 2019 Chicago Cubs are playing da baseball because neither fun nor mental describe their efforts through 156 games.

Six games remain and the Cubs still have a slim chance of playing in the postseason, but aren’t optimistic after watching them lose their last five games by a single run.

Just three years ago the Cubs won their first World Series since 1908. The celebration lasted months and the hangover has continued since.

In 2016 manager Joe Maddon was the toast of Binny’s Beverage Depot as the wily leader who broke the monotony of road trips by mandating players travel in costumes.  Kris Bryant, Anthony Rizzo, Jay Baez, and Addison Russell were assumed to be future hall of famers entering their prime.  John Lackey came to Chicago for something other than a haircut.  And fans believed they were embarking upon an era of annual celebrations that would make up for the endless decades of disappointment.

The costumes got old, Russell terrorized his wife, Lackey retired and dynamic ballplayers plateaued without reaching greatness.  Hitting and pitching coaches have been hired and fired annually, and players going through the motions became a hard habit to break.

Maddon will be allowed to drift away as his contract expires at the end of the regular season.  His leadership has run its course with this roster, and it’s a lot easier to change the leader than the players.  Tension between Maddon and team president Theo Epstein has escalated.  That strain will be resolved in Epstein’s favor because Theo sure as hell isn’t going to fire himself.

Players will be moved as well.  Who?  That’s anyone’s guess.  Kris Bryant is always the subject of rumors because his agent is well known for seeking the highest bidder for his free agent clients.  There is no such thing as a hometown discount to Scott Boras.  He’ll negotiate a crazy deal with someone willing to overpay for his contributions.  Bryant is two seasons away from free agency, so his value will never be higher.

The Cubs have committed the second most errors in the National League and lead all of baseball in base running blunders.  Whoever the next manager is – he will be expected to clean that up.

Pitching at every level has been an issue as well.  The bullpen has blown 28 saves (tied for 4th most in baseball) and the starters have been uneven all year.  Jon Lester and Cole Hamels are in the twilight of their stellar careers.  Upgrades are needed everywhere.

Getting to the top of the mountain is hard.  Staying there is the real test of a champion.  With one of the most stable rosters in baseball over the past five seasons, these Cubs are in the end stage of failing that test for the final time.