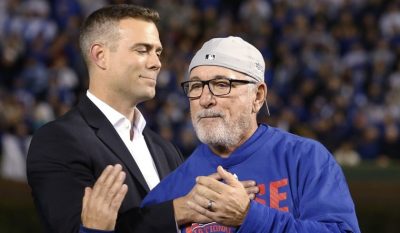 The love between Theo and Joe is gone – as it should be.

The Chicago Cubs lost their eighth consecutive game last night, and were mathematically eliminated from the postseason for the first time since 2014.

That’s the what.  But fans want to know why it happened, and more importantly how this doesn’t happen again to their team.

Why did Jon Lester, Kyle Hendricks, Jose Quintana, Cole Hamels, and Yu Darvish not deliver consistent seasons?  Why did a lineup that is mostly unchanged from the 2016 World Champions fail to deliver the runs needed to consistently compete with the teams who will compete in the postseason.

Is the problem psychological or physical?  Is it leadership – or a lack thereof?  Did Joe Maddon’s message grow stale?  Did Theo Epstein fail in building a championship level roster?  Were fan expectations out of whack with reality?  Is this 2019 season an anomaly?  Or was 2016 the outlier?

The answers to all of those questions is yes.  When a team fails, all are guilty.  It’s Epstein’s responsibility to figure out what can be done moving forward to correct the issues that caused this lost season – a season in which the Cubs will finish behind the lesser rosters of the Cardinals and Brewers.

What fans know is that watching Cubs baseball was not nearly as fun this season as it was in 2015 and 2016.  The Cubs appear stale – as though baseball became less enjoyable for the players and coaches.  Maybe Maddon’s dress up days became monotonous.  Maybe analytics were ignored.  Maybe there was paralysis by analysis.  Maybe 2019 can be explained by understanding that baseball is a weird and unpredictable.

What was new, fresh and fun three and four years ago has become flat and uninspired.  That much we can see by watching from the bleachers or our living rooms.

It seems irrational that athletes earning millions of dollars to play a boy’s game could find a way to go through the motions of a 162-game season without the emotional investment necessary to compete at the highest level.  Maybe that’s human nature for a team where change has been only on the periphery.

That is all well-reasoned and dispassionate, and that does little to describe my feelings as I sit here writing.  I’m pissed at the Cubs lack of joy and the lost season it created.  I’m outraged at Maddon’s use of the bullpen, and his insulting explanation as to how fans cannot comprehend how decisions are made.  I’m pissed about errors, base running blunders, and bad fundamental baseball.

I want heads on a platter – beginning with Maddon, whose usefulness as a manager has eroded over the last two seasons.  There has to be a consequence for bad baseball played by a team whose payroll is among the highest in baseball, and that consequence will be felt as he packs a box next week.

I’m tired of Kyle Schwarber being caught in rundown after rundown.  I’m tired of Epstein indulging in his new role as Addison Russell’s counselor rather than devoting every waking moment to the improvement of the farm system and roster.  It’s beyond my ability to comprehend why Russell is allowed to remain a distraction on the roster.

I will watch the last four games of the season from first pitch to last as I try to become so sick of watching this team that I don’t miss Cubs baseball at all during the offseason – kind of like a dad catching a kid smoking and locking him in a closet with a pack of Marlboros until they are gone and he’s green.

It’s a painful road we travel as Cubs fans.  2016 was a brief respite, but it did not immunize us from the anger and frustration that is our birthright.

Let the ax fall on those responsible!  Let the rebuild begin!  Calm heads need not apply as Cubs fans.