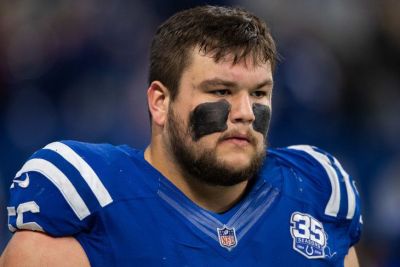 Quenton Nelson could be the first guard to win an NFL MVP award.

The Colts are 3-2 and tied for first in the AFC South after beating the Chiefs 19-13 in Kansas City last night.

No one picked the Colts to win this game.  The formerly 4-0 Chiefs were seen as an offensive dynamo the banged up Colts defense would be unable to stop.  With Malik Hooker, Clayton Geathers, Tyquan Lewis, and Darius Leonard out, how could this defense even be asked to compete?

The Chiefs were a team riding an NFL record 25-game streak of scoring 25 or more points.  The last time the Chiefs failed to score 26 or more points with Patrick Mahomes as a starter?  It had never happened.

With Jacoby Brissett starting, the Colts have scored more than 26 points one time – the 27-24 win against the Falcons in week three.

Math was against the Colts.  But games aren’t played with a calculator.

Headed into the bye week, the Colts are in good shape for several reasons.  Here are six of them:

6 – Defensive depth makes injuries hurt less.  How many teams could lose both starting safeties and the reigning NFL Defensive Rookie of the Year and still execute against the most explosive offense in the NFL?  The Colts got it done last night with Hooker, Geathers, and Leonard on the shelf.  At one point, both starting corners were also being treating for dings.  Safeties George Odum (2nd year) and Khari Willis (rookie), and corners Rock Ya-Sin (rookie) and Quincy Wilson (3rd year) kept Mahomes from sending the Colts home with a loss.

5 – Vinatieri almost perfect since Week Two.  Games against the Chargers and Titans were a nightmare for Vinatieri, but since then he has looked like the first ballot hall of fame Colts fans have counted on for the previous 13 seasons.  His only miss over the past three games was a 57-yard attempt that had the distance but slid wide right.  Vinatieri has made all seven extra points and the seven field goals he has attempted – other than that 57-yard miss.

4 – Penalties not a problem.  Colts lead the NFL in fewest penalties (5.4) and fewest penalty yards per game  (39.8).  IU Basketball fans who were around during the Bob Knight era believe “Victory favors the team that makes the fewest mistakes.”  The Colts are definitely making fewer mistakes.  Opponents are not as fortunate against the Colts, committing 9.2 penalties per game for an average of 85.6 yards.  That’s a 45.8 yard differential.  Limiting picks and fumbles is also a strength for the Colts.  They rank fifth in fewest turnovers.

3 – Jacoby Brissett not the reason Colts lose.  He might not win a bunch of games for the run happy Colts, but neither will he lose them.  Brissett has thrown three picks this season and only once has thrown more than one in one of his 22 starts (two at Jacksonville in 2017).  Sacks were an issue for Brissett in 2017 when he led the NFL with 52.  Not any more.  Through five games this year, Brissett has gone down behind the line just six times – none in the last two games.

2 – Left side of the offensive line the best in NFL.  LT Anthony Castonzo and LG Quenton Nelson give Brissett great protection and open massive holes at multiple levels for running backs.  Both are rated among the best in the NFL by Pro Football Focus, but you don’t need ratings to see the effect these two road graters have on a game.  Just watch Nelson seek and destroy a lineman and then shift his attention to a linebacker.  When he pulls on a sweep right, defensive backs hide.

1 – Colts are running the football – as promised.  Before the season, (and before Andrew Luck’s retirement), Frank Reich pledged the Colts would be a top five running team.  After five weeks, they are second in rushing attempts and fourth in yards.  Marlon Mack is also second and fourth in the same categories.  With the game on the line, the Colts can be counted to find a way to move the chains and keep the clock running.  It ain’t sexy, but it’s damn hard to stop.

Coming up after the bye, the Colts will play four of five at home against less than stellar competition.  Houston (home), Denver (home), Pittsburgh (away), Miami (home) and Jacksonville (home) have a combined record of 7-17.

But let’s not count any chickens.