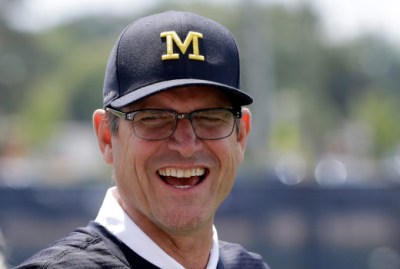 Jim Harbaugh is as good as it can possibly get for Michigan.

Is Jim Harbaugh’s seat going to get hot as Michigan’s head coach if the Wolverines lose to Notre Dame tomorrow night at the Big House?

Given the strange ideas kooky Michiganders have about their football program, it probably will, If the bigwigs in Ann Arbor are thinking clearly, they will realize Harbaugh has the program operating as well as possible.

In other words, this is as good as it will get.  If Michigan fans don’t get that, there are plenty of Rich Rodriguezes and Brady Hokes out there.

I’m no fan of Harbaugh as a coach, human being, or member of the Indianapolis Colts Ring of Honor, but replacing him would be an absurd reaction to Harbaugh’s success.

The Wolverines are 21 years removed from their last national championship and season with less than three losses.  Expectations that Michigan should beat Ohio State and be in the College Football Playoff conversation are unrealistic.  Michigan will never again be as consistently excellent as they were under Bo Schembechler.

The game has changed, and Michigan will never be able to recruit speed at the level of programs that routinely compete for a CFP berth.

Michigan hasn’t been great under Harbaugh, but they have always been good.  That counts for something given the grim runs authored by Hoke and Rodriguez – Harbaugh’s two predecessors.

Even if Michigan loses to Notre Dame and then in the season finale to Ohio State, they have a good shot at finishing the season 9-4.  Minus one miracle season under Brady Hoke, that would tie for being the best non-Harbaugh win total going back to 2006 when Lloyd Carr’s team finished 11-2.

If Michigan fans want a change at the top, they need to consider who would replace Harbaugh.  What coach is out there who could do it better – and if you find one, will any of them take the job?

Michigan has a tough road to the kind of success fans crave.  In the Big 10 East with Ohio State, Penn State and Michigan State, getting to the Big 10 Championship Game in Indianapolis is a very difficult putt.  And winning that game is a coin flip.  That is the minimum necessary to join the Alabama & Clemson Invitational.

Losing to Notre Dame and Ohio State would be understandable and forgivable.  Losing to Indiana in Bloomington on November 23 would be an entirely different issue.  Lose to Indiana, and Michigan is looking at a 7-5 regular season at best, and fans might start to be irritated rather than charmed by Harbaugh’s quirks.