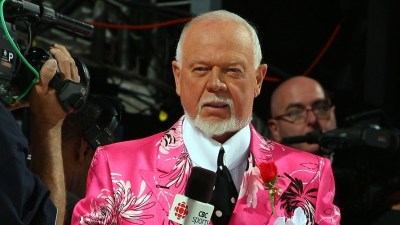 Don Cherry dressed like he didn’t care what people thought, and he continues to speak like that too.

Don Cherry spent many years hosting Coaches Corner on Hockey Night in Canada in his own unique way.  Today, he responded in a unique way to being fired for comments interpreted by Canada Sportsnet as racist and intolerant.

“I have just learned I’ve been fired by Sportsnet for comments made on Coach’s Corner Nov. 9, no problem.  I know what I said and I meant it. Everybody in Canada should wear a poppy to honour our fallen soldiers.

“I speak the truth and I walk the walk.  I have visited the bases of the troops, been to Afghanistan with our brave soldiers at Christmas, been to cemeteries of our fallen around the world and honoured our fallen troops on Coach’s Corner.

“To keep my job, I cannot be turned into a tamed robot.  I would have liked to continue to do Coach’s Corner.  The problem is if I have to watch everything I say, it isn’t Coach’s Corner.

“I want to thank everyone who has watched Coach’s Corner over the last 35 years.

“Remember to wear your poppy to honour our fallen soldiers … Thumbs up.”

Cherry’s firing came two days after he made comments about how tired he is of seeing recent immigrants to Canada (“you people”) not wear a poppy to commemorate soldiers who died in the pursuit of freedom.

As you read, there was no apology, and the inference that can be drawn from Cherry’s comments is that he could have kept his job had he issued one and then promised to talk about hockey and nothing but hockey.

Cherry is 85-years-old and was far closer to the end of his broadcasting career than its beginning when he veered from his job as a hockey analyst to opine about whether immigrants should or shouldn’t wear a poppy.  Deciding that consequences don’t mean a hell of a lot is what most wealthy 85-year-olds do.  That’s the fun of being a wealthy 85-year-old.  It’s also why they are fun to be around.

Many people here in the United States are adamant that the American Flag should be saluted, , and that standing for the National Anthem is mandatory.  There are others who insist freedom means the flag can be burned and staying seated (or kneeling) during the Anthem is emblematic of our freedom to express dissent.

Who’s right and what is true depends upon who you ask.  Cherry voiced his truth and was fired. He felt sharing his opinion was more important than keeping his job, and he backed it up with his post-firing comment.

Cherry is a hero to Canadians who wear a poppy and a pariah to those who don’t.  That’s the world we live in today, and Cherry appears to be just fine with that.