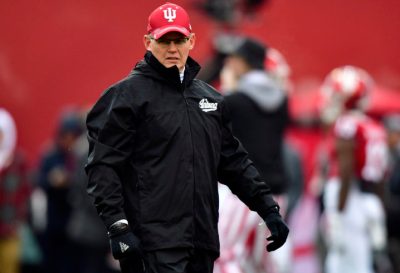 It was cold and miserable in Bloomington for the game against Michigan, but that doesn’t mean IU needed to bleed the clock in its 25-point loss.

Indiana ran out the clock on a brilliant 13-play drive that ate the final eight minutes of the game against Michigan.  Of the 13 plays, IU ran the ball 12 times.

If Indiana had been ahead by 25 instead of behind by that many at the time, fans would be thrilled.  To sit in the rain and cold hoping for a miracle comeback only to see the Hoosiers limp home moving the chains and the clock was disheartening.

Equally disturbing was the decision on the previous drive to go for the touchdown on fourth down rather than kick a field goal.  At that point, Indiana was down by 25, and a field goal would have cut Michigan’s lead to 22.  The difference between a 25-point deficit and a 22-point deficit is that it takes four scores to overcome 25 and three to overcome 22.  That’s a big deal for most coaches.

I didn’t take calculus as an IU student, but I understand that scoring four times is more difficult than scoring three times.  I also understand that Indiana was not going to catch Michigan, but watching Tom Allen’s Hoosiers serve as gracious hosts at Memorial Stadium was deflating for a fanbase that embraced a little optimism entering the game.

It was cold and miserable in Bloomington, and getting out of the stadium ASAP was probably top of mind for the few fans who remained, but rewarding them with acquiescence to the Wolverines was insulting.

Indiana fans didn’t needed Allen to expedite the end of the game because they were miserable. Hoosier partisans have always had perfect timing in ending their own afternoons inside Memorial Stadium.  They’ve never needed Lee Corso, Sam Wyche, Cam Cameron, Gerry DiNardo, Terry Hoeppner, Bill Lynch, Kevin Wilson, or Tom Allen to run the clock to release them from their seats.

Was Allen pulling the plug prudent in a game that had long since been decided?  Sure it was.  If starting quarterback Peyton Ramsey had been hurt trying to fight back from an insurmountable deficit, the Hoosiers chances to win the Bucket Game at Purdue this weekend would have crashed and burned.  Sometimes, it makes sense to pull the plug and allow a terminal patient to slip away into that good night.

From a logical perspective Allen made a reasonable decision to call off the dogs, but it’s still galling.  Allen chose to refuse to continue to compete.  If the chance to win was one tenth of one percent, which is what ESPN calculated it to be, a coach needs to continue to fight – and inspire his players to do the same.

Winning seven games is a big deal for Indiana.  That’s a threshold the Hoosiers have reached only once since finishing 8-4 in 1993.  Mucking the Michigan game after it was virtually out of reach to give his team its best chance to beat Purdue this Saturday both makes perfect sense and is unforgivable.

One thought on “Tom Allen chooses prudence over fighting against Michigan”